Jacob Louis Beaney’s Beaney: A Short History is a purported potted account of the life of its author to date with a heavy focus on three colourful relationships, and Beaney’s commentary on the reasons for their various terminations. As autobio work goes this one has a conversational style to it: the narration is chatty, informal and directed at the readership with a specific intent to build a relationship between author and audience. 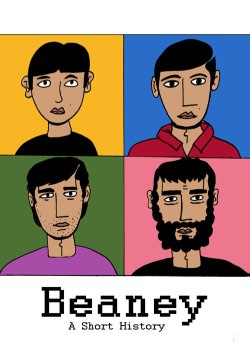 Divided into four main sections, the book deals with Beaney’s family history first before giving intimate accounts of his time with girlfriends Emma, Dee and Jane. Strictly speaking, Beaney: A Short History is more an illustrated story than pure comics, as the majority of the book comprises full-page illustrations with accompanying text. It’s playfully composed, though, combining illustration with occasional photographs and diversionary asides that accentuate the aforementioned relaxed tone.

It’s in these sections that Beaney is as its best. A look back at Beaney’s childhood adopts an irreverent approach with a mix of (presumably!) genuine and apocryphal history that includes an unlikely family crest, sly Waltons references and anecdotes about his rather eccentric father. His latter accounts of art school and living in a squat also have an engaging slice-of-life appeal to them, and there are moments of casual humour – self-deprecating one-liners – that have a likeable nonchalance to their delivery.

However, for myself the flaw with Beaney: A Short History is that these elements are often suppressed in favour of explicit accounts of the narrator’s sexual exploits which, although the main focus of the book, are actually far less interesting than what’s going on elsewhere. Occasionally Beaney‘s moments of genuine wit are obscured in the presentation as well. For example, the writing is noticeably stronger later on than it is at the front end of the book where it can sometimes be a little rambling in places but that’s also the material that, at its heart, is the funniest. 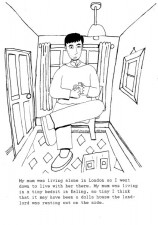 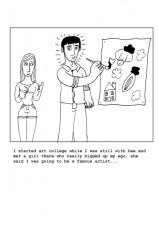 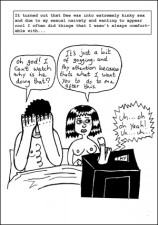 Now, I’m not sure as to the chronology of this project or whether it represents a collection of earlier work but artistically it does become noticeably more confident as the chapters progress, with the cruder art of the earlier pages  taking on something of an appealing blocky Mike McMahon vibe in latter parts. There’s something of a diary feel to it visually as well and, oddly enough, rather than detract from the reading experience, the various spelling/punctuation errors actually lend themselves to giving the book a distinctive voice, adding to that personal journal feel.

Beaney: A Short History is a curious beast then. I was intrigued by the raw but experimental authorial presence but it was that same storytelling style that grabbed my attention far more than the comic’s primary subject matter did. Of course, if uninhibited tales of sexual shenanigans showcased in a slice-of-life comics style are your thing you’ll find plenty to absorb you here. For myself, though, it was those more subtle parts of Beaney that showed, by far, the most promise.

For more on Jacob Louis Beaney’s work check out his site here. You can order a copy from Hickathrift Publishing here priced £5.00.