No doubt about it: Andy Poyiadgi is one of the new creators who recently entered the comics scene to much acclaim. Broken Frontier has been high on this man’s storytelling skills, as you’ve no doubt garnered from our review of his debut book, Lost Property, published by Nobrow Press earlier this month.

One lucky BF reader will receive a copy of Andy Poyiadgi’s Lost Property, thanks to the fine folks at Nobrow Press. Also included is this nice head sketch by Poyiadgi, featuring Lost Property‘s protagonist Gerald Cribbin and created especially for this contest. It’s only slightly smaller than the dimensions of the book, so it fits nicely inside! 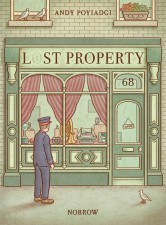 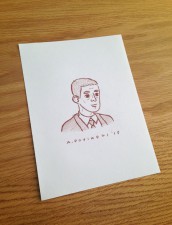 How to participate for your chance to win?

This contest runs from Thursday, March 12 through Monday, March 16, 2015. The winner will be randomly selected based on all entries received between the start of the contest and its end date.