It’s been a while since Ariel Olivetti has produced any interior work for a US comic book. He’s been doing covers here and there still, but has kept busy working on a series from the other side of the Atlantic, One Hit Wonder: Hollywood Killer from French publisher Indeez Urban Editions. His partner in crime is Fabrice Sapolsky, whose name might ring a bell if you’ve read Marvel’s Spider-Man Noir a few years back.

The first Hollywood Killer volume was released in France in March and Indeez has informed BF that an English version is on its way. Although we’re not at liberty to disclose who’s going to be publishing the book, Indeez expects to be in the October Previews and for the book to be available in early 2014. 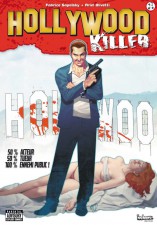 Here’s a brief description of the story:

His name was on every lips. His face was printed on cereal boxes. He was destined for stardom. But everything fell apart. He couldn’t get over his own success and became a One Hit Wonder. So Richie Reese grew up an angry man. He only found solace in violence and killing. Recruited by the Mafia, he became the best at what he does. Using his network in Hollywood, he turned out to be the ultimate hitman. But he needed something else. Being recognized by his peers as an artist, an actor. This is when things started to get ugly. This is where our story begins…