Utterly macabre, and filled with childlike curiosity and wonderment, the old Dead Boy Detectives series had all the right elements for grown-up readers that possess a tinge of youth within them. What else would you expect from a Neil Gaiman creation?

This new ongoing series is penned and drawn by none other than Mark Buckingham of Fables fame, so you can expect the same liveliness and eeriness that made that series a hit. The solicits hint that the boys will add a living girl to their crew, which seems odd considering she’s neither dead nor a boy. Can’t wait to see how it all shakes out! 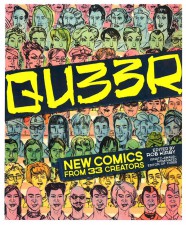 Published by Seattle-based LGBT specialists Northwest Press, QU33R is a 264-page anthology of new material designed to pick up where No Straight Lines: Four Decades of Queer Comics (edited by Justin Hall for Fantagraphics) left off in 2012. In case you’re wondering, the publisher hasn’t broken the E key on its type-o-matic; the book has 33 contributors.

The book has grown out of Three, an Ignatz-nominated annual zine published by its editor, Rob Kirby, and was the subject of a successful Kickstarter campaign earlier in the year. The cast of creators goes from decorated veterans such as Howard Cruse (Stuck Rubber Baby) to emerging talents like Sasha Steinberg and Jose-Luis Olivares.

It’s Young Liars meets The Exterminators as David Lapham launches the all-ages mini Juice Squeezers in which a bunch of kids take on a bunch of humongous bugs.

Spinning out of the three-part Juice Squeezers story in Dark Horse Presents, this is the continued adventure of a band of fifth graders who are part of a covert ops team to keep their small town of Weeville safe from the hordes of giant bugs living below ground.

2014 promises to be an incredibly busy year for Lapham with Juice Squeezers being just the tip of the iceberg, as he’s reviving his cult-favorite crime noir Stray Bullets at Image in March and has another all-ages series coming from Dark Horse in May, Kid McAllister. If you want to get a taste of Lapham’s diverse palette, start with something juicy!

A new writer kicks of Aquaman’s next storyline, “Sea of Storms.” Jeff Parker (Batman ’66) takes the helm as the King of Atlantis faces a new ecological challenge. The earth’s crust is shifting, releasing bizzare creatures and unleashing powerful volcanoes underwater. Nervous surface-dwellers are blaming the Atlanteans, and as Aquaman searches for answers he and Mera have a diplomatic hornet’s nest to settle.

Aquaman is cool again and with Paul Pelletier and Sean Parsons remaining on the title, Parker’s transition should be smooth sailing. 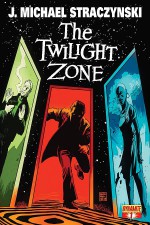 When Dynamite announced that they had nabbed the rights to produce a Twilight Zone comic, fans of the popular tv epic went through the roof upon learning that J. Michael Straczynski was going to pen the first twelve issues.

Much like Dark Horse has done with Joss Whedon and Buffy, Dynamite is hoping that JMS’ attachment will prove to be the perfect springboard to spur a succesful comic book franchise. Straczynski got his big break in live-action television by selling a Twilight Zone script and was part of the show’s writing team in the late 80s.

For his year-long run on the TZ comic, he’s created three separate stories told from their own point of view that when merged together form one overarching apocalyptic thriller. Oh, and there will be time travel too.

Superior Foes of Spider-Man proves that the Hawkeye style isn’t just limited to Matt Fraction and David Aja’s own unique genius. Nick Spencer and Steve Lieber deliver a book that is funny, absurd, and stunning to look at.

The second arc starts by throwing Tombstone into the middle of the fracas that already has the Sinister Six (Five, actually) going up against The Chameleon, The Owl, and Silvermane (his head at least). Also joining the chaos this month is guest artist Rich Ellis.

Multiple Bram Stoker Award-winner Jonathan Maberry comes to Dark Horse to pen Bad Blood, the latest addition to the publisher’s line of horror comics, including Kiss Me, Satan, The Occultist and Grindhouse: Doors Open At Midnight.

The ‘bad blood’ referred to in the series’ title has to be taken literally: Maberry puts a spin on the vampire trope as they’re unexpectedly becoming killable when they drink a cancer patient’s red juice only to find out that chemo-rich blood is not, well, true blood.

Putting vampires’ stomach in a twist with Maberry is Tyler Crook, who’s succeeded in making sure that B.P.R.D. didn’t miss a beat when Guy Davis left the book and wowed us with the woefully underhyped graphic novel Petrograd from Oni Press two years ago.