My local comic book shop moved recently. And it didn’t just move across town, it moved to a different city in a different state. But this is Chicagoland, and everyone in the suburbs moves to different suburbs. It’s all about radius here.

The thing is, I’ve been going to that comic shop since I was a kid. That exact shop was where I bought my first copies of Comics Buyer’s Guide and Wizard, it was the first (and for a very long time the only) place I maintained a pull list, and it was from their “vintage” shelves behind the counter that I bought the oldest comic in my collection, Superman #147. That book cost $9 and my dad thought I was crazy at the time for spending that much money for a single comic.

Speaking of my dad, I have been going to that shop since before I had a driver’s license, and Dad never complained about our occasional Saturday afternoon trips out to the shop. Even after I became a licensed driver and a more frequent patron of the shop, I’d take Dad along as the holidays approached. Gift-giving isn’t really all that difficult when your daughter is a relentless hint-dropper. But the small confines of the shop—call it cozy or cramped depending on your preference—always struck Dad as having too much to see to be able to see anything. 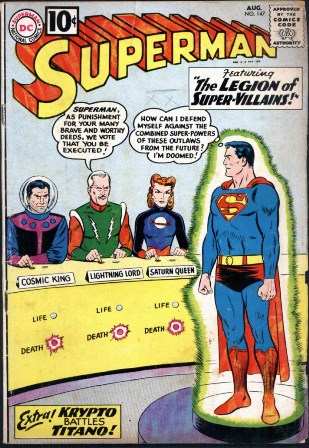 It was a long-since forgotten observation until the shop announced a few months ago that it was closing up, packing up, and relocating. That got me thinking. I must admit that Dad was right about the shop being so chock full of items that it was difficult to take it all in. And while it seemed normal to me because I’d been a longtime patron, it must have been simply overwhelming to a first-time visitor, people attending Free Comic Book Day, or a curious passerby who finally mustered the courage to see what all the fuss is over comics.

Too much of a good thing? Maybe it was. The regulars glided in and around the shop without a second thought, but as this hobby has been increasingly in the pop culture limelight courtesy of successful comics-based film franchises, more people are showing up in comics shops who have never walked into one before. And they are clueless as to what material would be enjoyable for themselves or their kids.

Two recent trips to the shop found me helping out lost-looking parents whose kids were so besotted by the sensory overload that—let’s be honest—is one of the most fun things about walking into a comic book store, that they didn’t know what to look at first and their parents didn’t have a clue as to which books would be kid-appropriate. They had walked right past the kid’s comics shelf that was located by the front door. Maybe sensory overload isn’t always such a great thing after all.

So the store relocated, and it’s now about 10 minutes closer to my place. On my first visit, I wasn’t ready for the new storefront itself. Whereas the old shop took up one storefront in a strip mall, the new one occupies three storefronts in a relatively new strip mall.

The store is full of natural light. The same bookcases and shelves I grew up with are now part of generous aisles. And I can just see how they will use the part of the space for gaming tournaments and creator signings. That kid-friendly bookshelf is near the front door and won’t be overlooked anymore.

Will I miss the old store? I have fun stories and fond memories courtesy of the old store, and nothing will take them away. Change can be a good thing, and I think that’s the case here. I won’t miss the longer drive. And the new place has plenty of character—and no lack of characters hanging around—so I’m sure my new adventures will be just as enjoyable.