Available online and in print, this self-published gem is a down-and-dirty experiment in committing to a strong narrative voice.

Truth be told, it took me a couple of readings to really get Lil. I mean I got it but I wasn’t sure I quite liked it. I knew I didn’t hate it but there was

something overtly unattractive in both the art and the story of the protagonist. At first I chalked it up to awkward rendering and the weird ellipses in the titular characters narration. By the fifth installment though, I was thoroughly enjoying myself, relishing Michael Young and Marc Crane’s disturbing noir mystery, intrigued by the stark setting and addicted to Lil’s simmering, self-loathing narrative.

This isn’t a comic for the uninitiated or part-time comic book reader. Lil challenges its audience viscerally like a gut-shot moving in slow motion. Crane’s art, which I admit took some getting used to, is misleading in its awkward rendering and seemingly slapdash application of the blacks. As the story progressed, I realized my distress reading Lil wasn’t a product of the art or the stilted narration but a reaction to the frank reality and tragic circumstances haunting the main character. Lil’s decision to confront the presumably horrific event of her past is hard come by. Young and Crane depict this internal conflict via an external confrontation between Lil and her dealer, during which she learns a few hard truths about herself and her ability to meet her past head on.

Crane’s art, although rough around the edges, actually matches Young’s script quite well. There’s an overwhelming sense of stark fatalism infuse in the quavering lines and intentionally-skewed rendering that mirrors the same quality in Lil. With clear, strong visual storytelling that relies on choosing the perfect moments and angles rather than blustery spectacle, Crane’s moody art provides this book with a distinctive visual voice that only grows on you with each page. 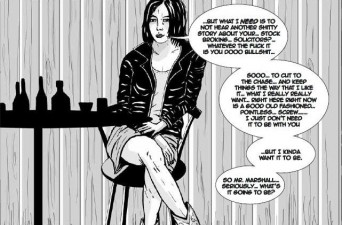 I get the sense this is only the beginning of a long, twisting journey. Lil is one of those stories it’s best to take your time with – a fact of which Young and Crane are well aware. Having read each issue online, I was impressed with the duo’s sense of timing as they utilized the chapter breaks to excellent effect.

Tough, dirty, and downright disturbing, Lil is a fascinating project that deserves a wider audience. I dare you not to fall in love with her, just a little, even if you know you shouldn’t.