Morning Glories went from being one of the best, most original series, to being a bit of a mess. A fun mess, but a mess none-the-less.

Season two promised a step back for the reader, only to be  the same exact thing. Now four issues into the second season, enough of the old has been wrapped up and season two can really begin. But is it too little too late?

Morning Glories #29 came out last week and finally wrapped up a storyline that has been going on for far too long. Technically this issue was the fourth of the comic book’s “second season”, but it acts more as a season one finale. So maybe now season two can really begin.

Let me explain a little.

The first twelve issues of the series were an example of this comic book at its best. The series took all of the best elements of LOST and placed them in a high school setting. The individual characters were immediately complex and likable, and they all worked terrifically as an ensemble. Plus, of course, there were the mysteries of the school. The school was at once both magical in its possibilities but with death seemingly waiting behind every door, as if Arcade set up his Murder World in the heart of Hogwarts.

But after two very successful arcs, the creative team made the mistake of moving the action outside of the school. The students were tasked with a twisted scavenger hunt that resulted in all of time and space going crazy. Or something.

The mystery got crazier and crazier while simultaneously making less. The book had always had complicated mysteries, but there was no longer anything to ground the reader among all of the absurdity going down. Characters and plot kept getting away from their original conceit and readers were no longer reading the story they had originally agreed to.

In one of the most recent issues, Nick Spencer uses one character to essentially explain to the audience what’s been going on since #13. They explain the storyline as a game of chess. 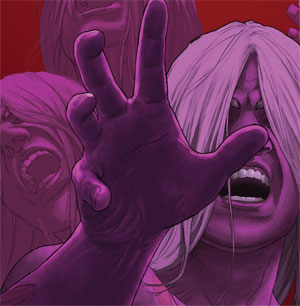 In the early parts of the series, the audience and the creative team were playing chess, and everyone was playing by the same rules that were agreed to. But then, around #13, Nick was no longer adhering to the rules that say his bishop had to move diagonally, and instead was picking up his bishop and putting it anywhere on the game board that he liked.

I respect the creative team’s choice to change the story so drastically, they had earned it. But, between my growing confusion about where/when/who/what was going on in the story and some delayed issues, I wound up leaving the book somewhere around #20. I wasn’t having as much fun playing the new game as I had when I was playing chess.

Just when I had given up on the series, it was announced that #25 would function as the Season One finale for the series, and #26 would act as the first chapter of Season Two. This was an announcement that seemed brilliant at the time because of the implication that this would give the chance for the series to move past some of the mistakes of the later issues, and to start fresh at the ground floor.

Ideally, a season of TV works as a cohesive whole. There is an ongoing narrative that starts with the first episode and ends with the last. There is of course room for cliffhangers and storylines that continue over to the next season, but ideally the new season has a new direction with something new to say.

Instead, season two started off exactly where season one ended. Through four issues, there is no discernible difference between where one season started and another ended.

And I don’t doubt that there are new things coming from Nick Spencer and Joe Eisma. This is a creative team that has shown considerable talent and kept the characters just as engaging throughout every single issue. It’s a testament to both of them that I have continued to love Hunter, Casey, Jun, Jade and Ike even though I’ve grown to hate parts of this drawn out storyline.

But where I think the team failed their readers was in not making Season Two a place for a breather. The first issue should have been used to reestablish the characters, the setting, and the mission.

The character that explained the series with the chess analogy ended the analogy by saying that their goal was ultimately to get the game back to chess. Of course, the consequences of changing games would still be felt. This game of chess would be missing a few pawns or a knight, but ultimately the new game would be chess again.

By starting Season Two where Season One left off,  it was like asking us to start a new game with them, only to find the game almost over.

Morning Glories #29 essentially ended the game that has been played since #13. But taking so long to finally clear the board, it’s fair for readers to question if the board is really even cleared. I have hope that #30 will finally be what I’ve wanted from season two, this series deserves a chance to start fresh.

But if the pawns start moving three spaces at a time then I’m out, I’ll know that Spencer and Eisma don’t play a fair game.