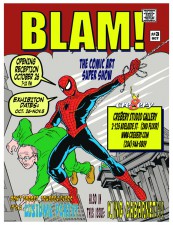 Tucked away on the fringes of Winnipeg, Manitoba’s historic Exchange District, a small band of local artists have gathered together in an unabashed celebration of comic book inspired art. This past Saturday saw the opening night reception of BLAM! 3 take place at the cre8tery. This third incarnation of local artist Justin Waterman’s effort to fuse the graphic narrative with the fine arts featured a dizzying array of styles and perspectives, from actual comic book pages to modern pulp covers to abstract interpretations of visual storytelling.

As Waterman puts it, when he put on the first BLAM! show in 2005, “I didn’t really start out with a goal, but that changed after I saw the art. I realized that the work needed to be showcased to a broader audience.” A self-taught artist who looked to comics to teach him how to both read and draw, he’s watched BLAM! evolve with each successive iteration. 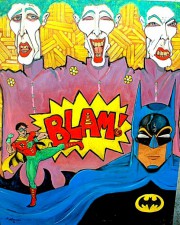 The last show was quietly hung “at the Concert Hall without warning the administrative staff of this plan. I was worried that just the idea of comic art in the house of the WSO (Winnipeg Symphony Orchestra) and RWB (Royal Winnipeg Ballet) would be denied. It turned out to be a great success. I received emails of patrons, and staff who admired the show. I asked the artists for that exhibit to submit large abstract and colourful interpretations of comic pop culture icons. The work began to sell as well. The opening reception was billed as a “costume event”. The art, music and creativity of the costumes fit like a glove.” 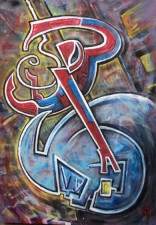 For Evan Quiring, a veteran of all three BLAM! shows, the gallery setting and the opening night reception offers “artists a chance to meet and schmooze at a fun, laid back kind of event.” A musician and published comic book artist who’s worked for Alternative Comics, Ronin Studios, and Afterburn Comics, Quiring has provided the all three events with their distinctive posters. He’s noticed that comics’ profile in Winnipeg seems to come in go in cycles: “At least once a year, there’s usually some type of article mentioning/ featuring the local comic book artists. Hopefully the BLAM! shows will boost their profiles to the next level.” 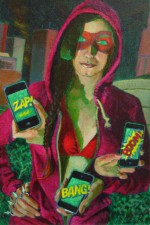 Waterman, in the meantime, already has plans for a fourth installment. BLAM! 4 is already in the works, with possibly a fashion show runway of creative homemade costumes at the reception. I would like to keep the nomadic theme of it being at a different venue each time it appears, so keep an eye out. The interest and talent is there to make this an annual event. See you in October 2014!”

Anyone looking to purchase work featured in this article can do so by contacting Jordan Miller at the cre8tery: jordan@cre8ery.com / www.cre8ery.com. BLAM! 3 runs October 26th to November 5th, in Winnipeg, Canada.