Simon Bisley’s artwork is fun, exciting, and engaging in this fresh take on Biblical mythology, and though Martin Brennan and Michael B. Jackson have matched the tone, they haven’t quite found the appropriate narrative structure to allow 13 Coins to fulfill its potential.

The Bible is one heck of a good read (content-wise, that is). It is full to the brim with mystery, adventure, betrayal, tragedy, and hope.

Its characters show us the very best and the very worst of human potential, and all of the respective tenderness and violence that comes with them. Its representation of good and evil is mythic in scale and execution, particularly in the Old Testament.

Had I not named The Bible right off the bat, these are exactly the sort of qualities one could ascribe to superhero comics. After all, Jerry Siegel and Joe Shuster’s pitch for Superman, as the story goes, was a retelling of the story of Moses.

All of these factors seem to place 13 Coins, written by Martin Brennan and Michael B. Jackson with art by Simon Bisley, in the perfect position to be a successful comic. While not explicitly Biblical canon, the story draws from the Books of Enoch – in particular the Book of the Watchers, in which a group of angels led by Semyaza rebel against God by taking mortal mates, and are subsequently banished from Heaven, chained until the end of days when they will be sent to Hell.

The comic expands on this premise, positing that a piece of the blood-stained chain that bound Semyaza has been smelted into 13 coins, each held by one of the fallen Watchers, who, with the aid of a prophesied “First-Born” will use the coins to free Semyaza and conquer Heaven itself. 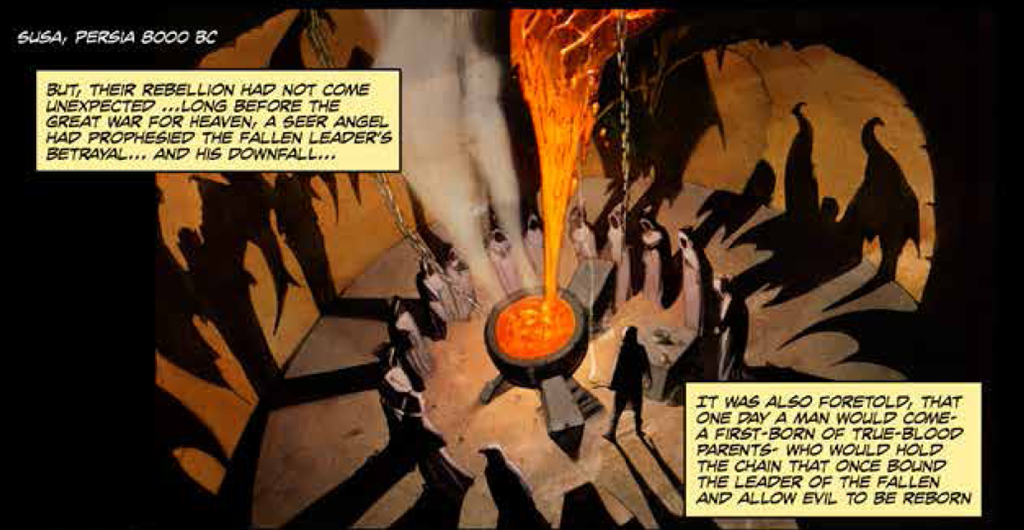 This all sounds wildly exciting: prophecies, battles, mystery, and cosmic stakes. And yet, all of that promise and potential feels wildly unfulfilled in practice.

At first glance, it’s difficult to pin down exactly where 13 Coins falters in delivering its potentially spectacular content, but upon re-reading the debut issue several times it becomes increasingly clear that the issue lacks stakes.

With the fate of Heaven and Earth in the balance, mustering stakes shouldn’t be a concern, but 13 Coins #1 undermines its narrative ability by giving up too much expositional information in its opening salvo.

Some of it is necessary. The introduction of Semyaza and the Watchers is crucial to establishing the conceit of the series. Where the exposition begins to feel long in the tooth is when it dives into the nitty-gritty details. Knowing there is a prophecy is useful information, but there is no need to know it word for word so early into the book.

Likewise, the segment of Semyaza’s chain being smelted into coins and the fact that the chosen one must use the coins to free him feel like details that could have a greater impact elsewhere in the narrative.

Halfway through the issue, the reader is left with the impression that they know, for the most part, the entire arc of the book. Some of the elements of that opening exposition would have made thrilling revelations throughout the series: a piece of Semyaza’s chain was stolen, they can’t find the chain because its been turned into coins etc.

By forcing it all into the early pages of the first issue, the subsequent scenes of the book – meeting the aforementioned prophesied hero, John Pozner, and encountering for the first time the conflict between the Watchers and the Angels – feel incredibly rushed.

There is no time for all of the characters to establish any roots, so the action and violence and danger don’t register on an emotional level because the people involved don’t mean anything yet. This is particularly dangerous territory for a debut issue trying to get a foothold. 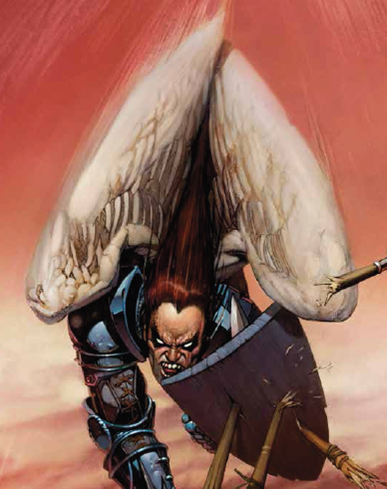 Visually, however, 13 Coins is fascinating. Simon Bisley’s unique style is perfectly suited to the tone of the book. It is simultaneously sharp and soft; the crisp lines are tempered by the delicacy of the colours.

Especially in the incredible splash pages, the artwork is stunning, like a fine painting, while retaining the grit and organic nature of a 1980s metal album cover, which reinforces the pseudo-exploitative action genre in which the narrative sits.

Every promotional piece about this book has billed “Eisner Award-winning artist Simon Bisley” before writers Brennan and Jackson; this is incredibly telling. The artwork is outstanding and far and away the best component of the comic.

It is disappointing that not only does the writing not live up to the art, but it doesn’t meet its own potential. This plot is still rich in intrigue and action, and the tone set by the art and the dialogue – while not especially progressive in terms of the female characters – is an interesting and well-executed juxtaposition to the so-called narrative style of the source material.

If it were any other story, 13 Coins #1 wouldn’t quite have convinced me to continue reading, but the lingering promise of the rich Biblical mythology probably means I will give the title the benefit of the doubt.

At the very worst, I’d be in for another wild ride through Simon Bisley’s stellar artwork.

**Issues #1-5 are available digitally through the 13 Coins app, available for download via the comic’s website. Titan Comics will subsequently publish a print version, with the debut issue set to hit stores in October.**