Forty-five may seem a somewhat arbitrary number for a major publishing anniversary celebration. But when it spawns spin-offs like the 45 Years of 2000 AD Anniversary Art Book most of us will no doubt be entirely willing to overlook that, as birthdays go, a 45th one isn’t usually considered a landmark occasion. And what a simple but incredibly appealing concept for a book we have here. A collection of pin-ups depicting some of the many characters/stories/serials to have appeared in the Galaxy’s Greatest Comic over the last four and a half decades but as visualised, paid homage to, and re-imagined by artists who have never worked on these properties before. 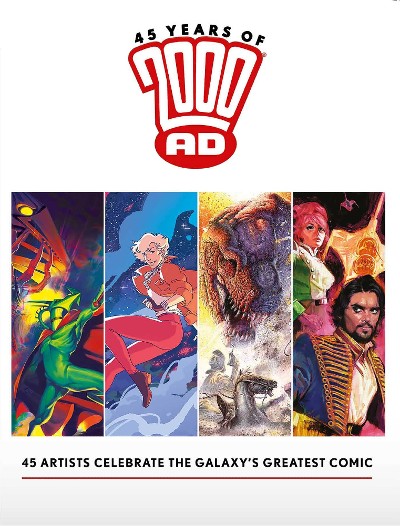 That careful curation of artists is the first thing that stands out about 45 Years of 2000 AD. From small pressers to top names in current serial comics, through to indie faves and industry giants, the range of styles and approaches reflects the scope of both the form and the scene. Full illustrations sit across from artist bios and a brief synopsis of the strips/characters they portray. They hint at what could be, tease us with an instant desire to see more, and pay tribute to the originals with reinterpretations that play to the artists’ strengths without losing sight of what originally gave each feature its appeal. 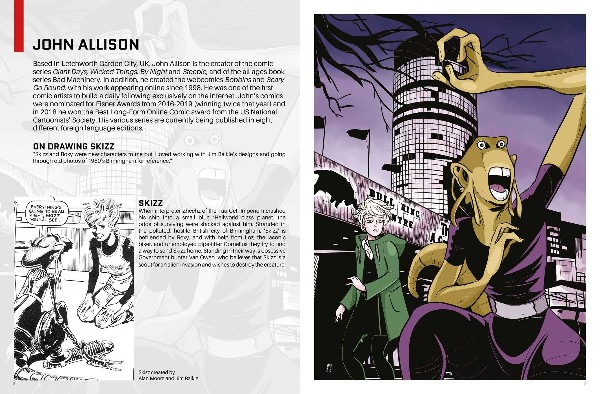 What’s particularly fun is that the chosen characters aren’t just the big names like Judge Dredd or the lesser-known fan faves like D.R. and Quinch. They also include the obscure and the largely forgotten outside of hardcore fans (Francesco Francavilla’s feral take on killer polar bear Shako for example or Kyle Hotz giving The Visible Man a most appropriate body horror vibe). 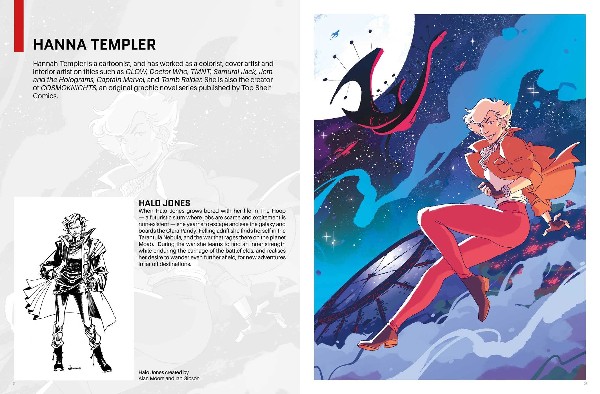 In a book paradoxically full of standout images there are some which entrance us with the possibilities they represent. Steve White captures the original cowboys versus dinosaurs set-up of Flesh with a visceral power and majesty. Sanford Greene’s take on future sports team the Harlem Heroes is a real “what if?” moment. RAID71’s Robo-Hunter promises a Neon Noir version of Sam Slade. And Rachael Stott (Indigo Prime) and Jamie Smart (D.R. and Quinch) give us sublime iterations of their chosen subjects that are stylised and yet still entirely faithful. 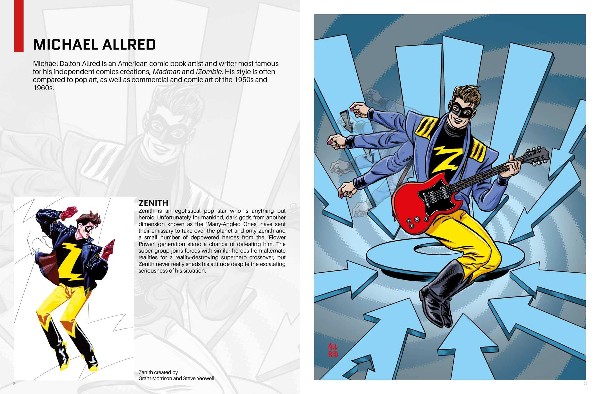 Of note to the Broken Frontier audience Decadence’s Stathis Temberlidis (Hammer-Stein) and Lando (Fink Angel) establish their sci-fi credentials for (surely!) future contributions to the comic, and it’s a treat to see BF ‘Six to Watch’ artist Josh Hicks (Glorious Wrestling Alliance) on Mean Arena. Colleen Doran, Kelley Jones, Mick McMahon, Sean Phillips, Michael Allred, DaNi… the line-up of names in 45 Years of 2000 AD is an impressive one indeed. This is a book that you will return to time and time again, and a wonderful souvenir of four and half decades of 2000 AD.