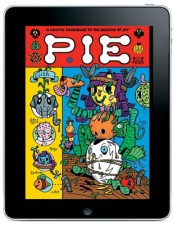 “Alternative Comics has an extensive, hilarious and thought-provoking catalog of work by tremendous independent creators and we’re excited to be able to share these stories worldwide on comiXology,” said comiXology’s co-founder and CEO David Steinberger. “Now fans and newcomers alike will be able to get access to these great titles and experience them in a whole new way with our Guided View reading technology.”

“Making Alternative Comics available digitally on comiXology is a big step for us that we are truly excited to take,” said Alternative Comics General Manager Marc Arsenault. “Bringing high-quality independently created comics to a larger readership has always been our mission and having our extensive back list and all of our new books available through comiXology will give a whole new generation of comic fans access to our catalog.”

Here’s a full list of the Alternative Comics titles debuting today across the comiXology platform:

Alternative Comics is an independent comic book publisher with an extensive back catalog of humor, satirical and original creator-owned titles. Jeff Mason ran the company from 1993 until 2008, and it was re-launched in June 2012 by industry veteran Marc Arsenault.