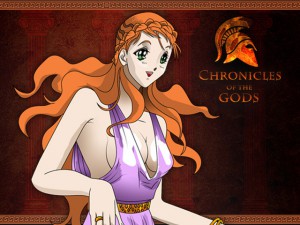 Chronicles of the Gods is a new & fun way to learn about mythology. The first book, The origins of the seasons is based on a Greek story that –as the title implies- explains in a fantastic manner how the world came to have the different weather seasons that today exist.

In this story you will notice a sad and bored Hades, god of the underworld, sitting on his throne and watching the time to pass by while nothing new happens in his immortal existence. But this boring and painful picture will be unexpectedly altered by the presence of the beautiful Persephone, daughter of the goddess Demeter. Hades will leave the underworld and will ascend to the Earth with the purpose of taking a closer look of Persephone. He will follow her carefully and will stare at her closely while she plays around with a group of nymphs, he will use his divine nature to take advantage from a nymphs’ moment of distraction, by kidnapping Persephone and bring her to his dark domains.

Tags: chronicles of the gods