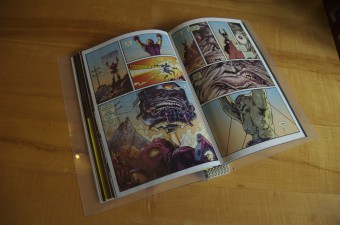 The COMPILER is a modular comic book binder that provides an alternative to library binding for those that want to display and share comics. Unlike library binding, which cuts the book’s spines and uses glue to affix issues to a cover, the COMPILER is non-permanent, non-destructive and reusable. It’s a DIY paperback. Modular elements are assembled to match the number of comics desired in a binder because comic book story arcs vary in length. Standard screw posts are used to hold the covers to the spine elements.

The comic book industry has been moving towards paperbacks for years and is now moving towards digital distribution. The industry works by releasing comics in single issues. If a book is popular enough, the series continues, else it is cancelled. For those books that sell well enough, the issues are repackaged as paper backs. A few warrant enough demand to be reprinted again as hardcovers. Some readers wait for the collections as they are convenient, compact, easy to share and provide a complete story. Additionally, the industry is also offering digital comics the same day as the shelf release. Despite this, single issues will continue to be a vital part of the industry. Single issues provide the immediacy of reading books as there are developed and as the events in the books occur. This is analogous to watching a tv show or sports event at the time of airing vs as a DVD or taped delay. Also, single issues provide the opportunity to acquire the first appearance of events and characters in any medium. There is no “first printing” for digital offerings. Once bought, the majority of comics are placed in plastic bags, placed in boxes and then stowed. Print books, unlike digital can be shared but for the most part are not because of the cumbersome storage methods. They are never perused because the only thing that is visible is the top of the book, some plastic, and the edge of some cardboard, if it is used. Out of sight, out of mind. Some series may never be preprinted as books. Additionally, there are decades worth of comics from the era before paperback were prevalent already in existence. This is an effort to get comic books reread and back in circulation.