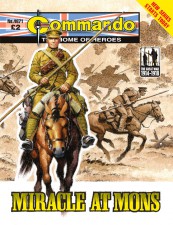 On the morning of the 28 June 1914 two pistol shots fired in a Sarajevo street would plunge the world into the most destructive war it had ever known as a spider’s web of alliances set Great Power against Great Power.
At the time, the event in Bosnia meant little to Sid Blake, a reluctant cavalryman — but willing soldier — in the Army of King George the Fifth. It meant more to him when he and his horse were shipped to France to play their part in the opening salvoes of The Great War. 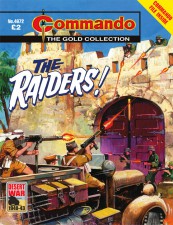 Nearer dead than alive, a dozen men of the Long Range Desert Group struggled on across the burning sands of the Western Desert. A Nazi plane had shot their trucks from under them.
And then they heard the terrifying whine of the diving aircraft again, and the hammering of its machine guns made them seek desperately for cover. But there was none. Young Lieutenant Pete Strong saw every one of his men — all his closest buddies —mowed down before his eyes.
At that moment Pete made a vow that for every drop of British blood that was spilled the Nazis would pay tenfold.
This is Pete’s story…
Introduction

Classic, classic Commando. An action-filled story, crammed full of bullets, bombs and burning vehicles brought to life by one of the best comic artists ever — Victor De La Fuente. Victor’s line influenced a whole raft of comics illustrators — very much for the better — enabling them to bring dynamic movement to the most static of images. His drawings give the Clegg script, with its thinly disguised military message, a vivid quality inside a scene-setting cover from fellow Spaniard Chaco.
A bit late for Christmas but it’s still a cracker! 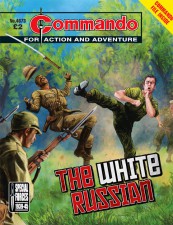 Andrei Glazov had been a soldier of the Russian White Army. He had also been a bodyguard in China — where he learned truly astonishing fighting skills. When the Second World War broke out, though, he was peacefully settled in France, his fighting past behind him.
Then a young British soldier — Private Charlie Hicks — called upon the Russian to pass on his fighting skills and knowledge. It seemed that Andrei would be going to war — and to the East — once again… 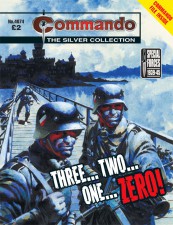 Two men on a mission of doom. Two sinister black shadows pulling themselves silently out of the water. Half of their job had been done. Now the other half awaited them. The sentries must not see them, must not hear them. Closer and closer they crept, through the icy darkness. Now they were only yards away…

Deputy Ed Scott is on holiday this week so I get to tell you about the latest addition to our Silver Collection. If the quality of menace in this story’s cover is more than silver, though, it’s Ian Kennedy at his Gold Star best. I don’t know about you, but I almost feel sorry for the two Germans the pair of Royal Marine frogmen are creeping up on.
Cracking title, too, much better than the very matter-of-fact “Frogmen” working title. That didn’t do Mr Daniel’s story any favours. Gordon Livingstone’s artwork does, though. It’s action all the way in a style all his own.
Scott doesn’t know what he missed! You won’t tell him, will you?