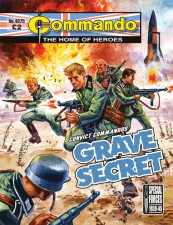 Private Titch Mooney, the Convict Commandos’ man-mountain — ex-circus strongman and ferocious fighter — had no problem destroying a V2 rocket site in the face of a hail of lead fired by vengeful Germans as flames licked about his heels.

But this solid granite character began to shake as he, Guy Tenby, Smiler Dawson, and Spider Mackay made their way through a Dutch graveyard. Was it superstition or was there a grave secret hidden there? 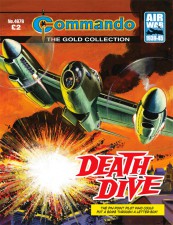 It’s the moment a pilot dreads most — when he first discovers that he’s lost his nerve.

Hands that have always been rock-steady now tremble as they touch the joystick. His mouth is dry with fear, a cold sweat breaks out on his brow.

Flight Lieutenant Ted Ridge knew all the signs. But only he knew he wasn’t fit to fly his Mosquito bomber on any more raids.

And then the RAF picked him for a specially dangerous flying job — a job that no one else could tackle. Ted Ridge just couldn’t convince them that he wasn’t still the best Mossie pilot they had.

In today’s enlightened times, post-traumatic stress disorder more accurately describes the phenomenon of service personnel being overwhelmed by the demands of active service in a war zone. In 1964, losing their nerve was the term used. Though this Kenner script deals with that situation but in a typically Commando way, it’s not hard to read a deeper meaning into this story with echoes of the famous Amiens prison raid — Operation Jericho.

That’s if you don’t get completely distracted by Ken Barr’s movie poster-style cover and Gordon Livingstone’s gritty, angular inside art.

Read it twice…just to make sure. 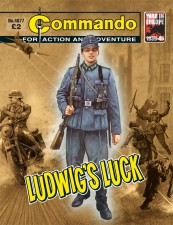 It is often said that it is a matter of luck whether or not a soldier survives a war. The luck young German Army corporal Ludwig Richter got ranged from bad to worse as the Second World War brought him repeated injuries and robbed him of so many of his friends.

Surely it could only be a matter of time before Ludwig’s luck ran out…for good. 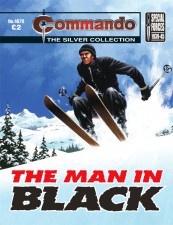 He was rarely seen, this lone, mysterious figure clad completely in black who powered his way over the snow-covered slopes of the Swiss mountains. He was a sinister apparition bathed in moonlight, his only friends the shadows.

But there was even stranger thing about him. Why did his tracks lead to the German border?