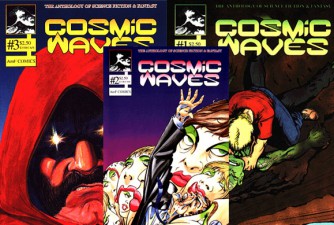 Cosmic Waves originally collected stories back in the 90’s from the genres of science fiction, fantasy, horror and beyond! This new incarnation of Cosmic Waves will continue to present all new stories of mystery and wonder, from a group of talented creators from all around the globe!

Aside from their general all-consuming love of comics, the contributors have a special place in their heart for comic book anthologies. From the early horror and mystery collections to more modern anthologies such as Negative Burn and Dark Horse Presents, they are huge fans!

Aside from massively enjoying the format itself, they also believe that anthology titles are incredibly important to create and support because they offer creative opportunities to young or under-appreciated creators from all walks of life. This also means that fans get to see an insanely diverse group of artists, who might never get a chance to work together, all under one incredible roof!

Cosmic Waves need your help to make this anthology a reality. You can contribute here: https://fundanything.com/en/campaigns/cosmic-waves-a-comic-book-anthology
With your generous contribution, you will ensure the publication of the first issue of the all-new Cosmic Waves comic book anthology! Also, what you are really doing is allowing Cosmic Waves the ability to print a larger number up front, so that they can lower the cost of each individual book in the future. The more they can print up front, the less each one will cost.