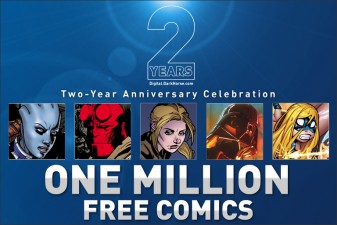 Now that the dust has settled on Dark Horse Digital’s incredibly successful two-year-anniversary promotion, the company is pleased to announce that it gave away a million free digital comics!

As part of the celebration of the second year of the company’s digital initiative and proprietary storefront, fifty free single-issue comics were made available for only forty-eight hours. In that time, thousands of fans took advantage of the offer and downloaded their favorite Dark Horse titles, to the tune of a million copies!

“The success of our digital promotion illustrates the growing reach of digital comics, which we believe are an important element in the recent resurgence of physical comic book and graphic novel sales,” said Dark Horse’s president and founder, Mike Richardson.

Dark Horse Comics launched its standalone comic-reader app and digital store on April 27, 2011, and has received incredible support from the continuously growing digital-comics fan base.

Since then, Dark Horse Digital has grown significantly in numbers and readership by featuring its most popular and best-selling titles, including Star Wars, Buffy the Vampire Slayer, Serenity, Hellboy, Avatar, and Mass Effect, as well as exclusive digital-first series, such as Falling Skies, Prototype 2, and Dragon Age. Dark Horse Digital also provides sales and discounts for its reader base on a weekly basis. It currently offers thousands of comics and continues to increase the digital availability of the Dark Horse back catalog.

Dark Horse Digital is available through all modern web browsers and features cloud storage through both the Google Play and iOS apps.