The War Machine, the first fourteen-part story to feature the rebooted version of 2000 AD’s Rogue Trooper by Dave Gibbons and Will Simpson, has just been released in collected form in North America at long last. The question is, is it a hit or a misfire?

By 1989, 2000 AD had wrapped up the stories of several of their long running characters, and over the next few years would try to reinvent a number of them in hopes of doing something fresh and new with the concept. The second generation Harlem Heroes, Mark Millar’s revival of Sam Slade, Robo-Hunter and the ill-fated Strontium Dogs series were all examples of this to one degree or another, but all of them were essentially additions to or continuations of their respective original mythos.

The 1989 reboot of Rogue Trooper, however, was just that: a total reboot totally divorced (initially, at least) from the original Rogue’s continuity.  It was a bold attempt to revitalize a once hugely popular strip which in the opinion of many had lost its way over the years before being unceremoniously dumped in the most low-key way possible, and with Dave Gibbons (one of the co-creators of the original Rogue) at the helm, it really deserved to succeed. But unfortunately, good intentions are not always enough, and this is a series beset with problems from the outset.

The story is essentially a retelling of the origin of the original Rogue Trooper, but in a form more in tune with the sensibilities of the time, so that while new Rogue Trooper Friday is, like Rogue before him, a genetically engineered clone fighting a futuristic war on Nu-Earth, the war in question is rather more complex than the simplistic American Civil War riff of the original and the characters far more realistic in many ways. Unfortunately, realistic does not necessarily equate to likeable.

Dave Gibbons was not the writer of the original Rogue Trooper series (it was created by Gerry Finlay-Day) and his interpretation of the character differs wildly from the original. In an interview on the subject, Gibbons explained his desire to “take out the crap” from the previous version, including the Biochips, digitized versions of Rogue’s three dead comrades Helm, Gunnar and Bagman whose personalities lived on in his helmet, rifle and backpack and continually bickered with him and with each other.

Gibbons disliked the concept and, while The War Machine begins in much the same way as the original series with Friday and his cohorts being lured into a trap and wiped out almost to the last man (the set-up for the series to come, as the Rogue Trooper’s principal motivation is getting revenge for his dead unit) none of the analogue characters for the Biochips, in this case Top, Lucky and Eightball, make it past that first apocalyptic engagement. From the outset, Friday is alone fighting for survival in a hostile world. 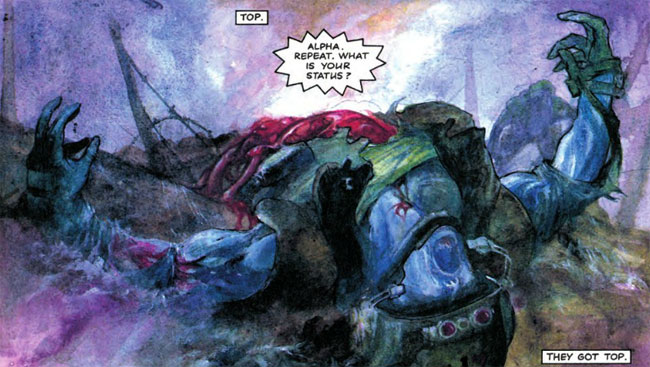 Unfortunately this really doesn’t work, since the point Gibbons seems to have missed is that a big part of the reason for Rogue Trooper’s success was that contrary to first impressions, it was about a team! Helm, Bagman and especially the belligerent Gunnar were readers’ favourites, and their banter helped divert some of the attention from the stoic Rogue, whose often uptight personality wasn’t really enough to carry the strip. Friday has much the same uptight personality in The War Machine, albeit with occasional forays into whining self-pity and impotent rage, but with no supporting cast there is nothing to distract the reader from the fact that he’s not really particularly interesting or, indeed, very sympathetic.

This version of Rogue Trooper, unlike the original, is very much a standard humourless action hero of the type that were inexplicably popular at the time, but he’s not really a hero so much as just a guy with an enormous chip on his shoulder, and he isn’t really all that bright either; it takes him an inordinately long time to figure out what’s really going on in his world

The action sequences themselves (and large chunks of this are non-stop action) are well executed by artist Will Simpson, who was drafted in when original series artist Gibbons realized he wouldn’t have time to both write and draw it, but there’s no getting away from the fact that Gibbons was the better artist for the strip (which actually took several breaks during its original serialized run in order to give Simpson a chance to catch up).

So, we basically have a rather disjointed story written by the artist who created the original character but who had had little experience of writing at the time, and drawn by an artist with no previous association with the character who, while he is undeniably good at his craft, never quite seems to engage with the strip somehow. That’s not to say that it’s bad – the art is actually very good – it’s just not really memorable in the way that Gibbons’ version was. And the actual plot is fine and stands up well against much of the material it was sharing shelf space with in the late Eighties, with the revelation of who Friday’s real enemy is being a nice twist, but it does seem to me to lack much of the imaginative quirkiness of the original Rogue.

All the basic ingredients are there, the tortured loner seemingly betrayed by his own side and fighting for justice in a brutal environment, but somehow those ingredients don’t really come together, and the curse of decompression so prevalent in comics over the last couple of decades is definitely at work here too, with Gibbons and Simpson taking fourteen episodes to tell a story which Finlay-Day would probably have wrapped up in four.

I’m not exactly selling this book, I know, but it’s probably not entirely surprising that Gibbons and Simpson left the series pretty quickly after this initial outing and subsequent writers soon reinstated most of the elements that Gibbons had written out, first the Biochips (this time a resurrected Top, Lucky and Eightball), then the original Rogue’s distinctive Mohawk haircut, and finally the entire cast of the original series itself in a not entirely successful attempt to tie it all together and appease the fans who were totally confused by the whole reboot.

Ironically, in trying to simplify Rogue Trooper and distil the essence of the concept into something fresh and exciting, The War Machine only really serves to dilute it and to start it down a path which will ultimately make it so hopelessly convoluted and confusing that to this day Rogue Trooper is considered toxic by 2000 AD’s editors, in continuity terms effectively the British equivalent of DC’s Hawkman!

There were some good stories along the way, and this book is probably a good (not to say essential) primer for Friday’s ongoing adventures if you really want to get into them. But when, after a lengthy absence, 2000 AD eventually revived the original Rogue for a short series of flashback adventures, it’s telling that the first instalment began with Rogue standing in front of a wall scrawled with the graffiti legend “Thank God it’s not Friday”. And I must admit, that’s a sentiment I find hard to disagree with…