Josh Howard provides a fine jumping-on point and a strong springboard for the final chapter of Nara Kilday’s story.

Setting up the conclusion of a book with a sharp retelling of the events that led to its beginning is a smart choice when you’re writing the last story arc of a long-running comic. And Josh Howard does such a fine job of it that readers new to Dead@17 could pick up this first issue of The Blasphemy Throne and immediately understand the dire circumstances facing these characters. 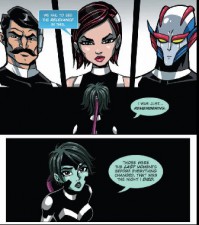 Nara Kilday has been through the wringer. She has died and been resurrected (twice), and now her spirit has been separated from her body. To make matters worse, her soul isn’t even in the same dimension as her body.

Nara is a captive of sorts, and relates her story at a hearing where she is uncertain of her transgressions. “Look, I don’t know where I am or who you are. All I care about is getting back to Earth,” she pleads. But it won’t be that easy.

Nara recalls the events that brought her to this hearing, and Howard gives readers all of the background information needed to hope that things finally go well for her.

The exchange with her adopted dad is priceless, as he offers not just sound fatherly advice and a terrific pep talk but also the use of his guns to chase away unwanted suitors. He’s the dad every girl wants to have!

Although the other participants aren’t thrilled to hear her story, they are in a position to help, because she is on a transdimensional soul carrier that is heading to Earth. But will they help? Meanwhile, on an Earth ruled by her old nemesis Abraham Pitch, Nara’s dying body is discovered in a dumpster by someone likely to help.

Howard’s first issue (of seven) is in large part a recap and in smaller part a springboard for the final adventures of the series. His animation-inspired artistic style for this book is appropriate to the story and the issue sets up plenty of questions to keep Nara and her friends busy and in danger for the next six issues.