What does it take to drive an ordinary man over the edge?

It might seem like a cliché to outline a crappy childhood as the root cause of criminal judgments in adulthood, but in the hands of Warren Ellis, a lifetime of underachievement, jealousy, and pent-up rage is a recipe for madness. And no, I’m not talking about Marc Spector. This issue features the finest police work ever attempted by Officer Ryan Trent, a mediocre-at-best beat cop with no potential for moving up the department ladder to detective.

Dismayed at the faith others in the department have placed in Moon Knight, Trent vows to his bored wife, “I’m going to find out what’s so damned special about ‘Mr. Knight.’” He poses as a detective to obtain Moon Knight’s files, bribes the evidence room officer to procure a former S.H.I.E.L.D. agent’s ID card, and focuses his attention on the criminal career of Carson Knowles, aka Black Spectre. While masquerading as an agent, the best information Trent acquires comes from two of Moon Knight’s former associates, Marlene Alraune and Jean-Paul Duchamp. Both caution him that Moon Knight works alone and is something more than human. 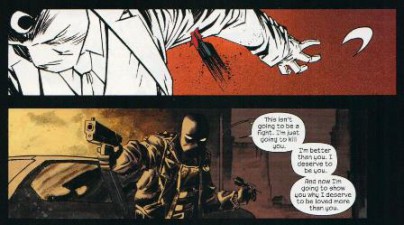 Unfortunately, Trent is convinced that he can become the Black Spectre and replace Moon Knight as the city’s “freakbeat detective in a mask.” The explosive altercation between the two is the culmination of the tension Ellis built with every panel as Trent succumbs to his own delusions of grandeur. There is always the chance that heroes inspire the opposite traits in others, and Ellis uses this to great effect with his concluding issue. And by leaving Ryan Trent defeated but alive at the end, Moon Knight probably hasn’t seen the last of the new Black Spectre.

Ellis and artist Declan Shalvey conclude their fantastic run on the title with this issue, and fans are sorry to see them go. With just six issues, the pair has transformed Moon Knight into a relevant player in the Marvel Universe—and that’s no small accomplishment. Shalvey’s thick line work and distinctive art have set an appropriately dark tone for the book, and Ellis has refashioned the character’s origin and functional madness into sources of constant intrigue and conflict. Mystery and madness go well together, and where characters like Batman walk the sometimes ragged edge of obsession, Ellis has given us a version of Moon Knight who embraces his madness and unapologetically uses it as an asset and advantage. Thanks for the great run, guys!

I’m leaving Moon Knight on my pull list, and I’m looking forward to the stories that Brian Wood (DMZ, The Massive) and Greg Smallwood (Dream Thief) are going to cook up.