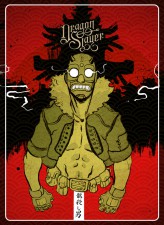 Devin Kraft of Cheshire Cat Studios has been writing and drawing dragon Slayer since September 2012, and after successfully Kickstarting the first two issues, he turned to the crowdfunding site Kickstarter to launch the third and final installment as well as the graphic novel collection for Dragon Slayer.

Dragon Slayer is a tale of revenge between a vagabond, a king, and a dragon, with the comic shifting viewpoints between El Diel, an almost Tarzan-like character that lives outside the city gates and Aldebrand, a king who has taken to hunting instead of warring with rival kingdoms. Without warning a dragon burns the city to the ground, which sets both men off on quests for revenge.

“The response to the comic has been great,” said Kraft. The Kickstarter campaigns for the first two issues tripled their goal, and were chosen by Kickstarter as “Staff Picks.” The second issue of Dragon Slayer was selected by Kickstarter as the project of the day, an incredible honor.

“I don’t know if any other comic series has been Kickstarted in its entirety, issue to issue,” said Devin Kraft, author and illustrator of Dragon Slayer.

“I love that with public support I can continue telling stories on my terms. It can be an incredible amount of work, but it is about as rewarding as it is challenging. It’s  are for someone who is outside of the industry to be able to complete an entire graphic novel, and I’m so grateful to Kickstarter for giving me that chance,” Kraft said.

Kraft takes great care in every aspect of creating each issue of Dragon Slayer, spending months to write and draw each issue, one month to build the Kickstarter  ampaign, one month to run the campaign, and one month to send out the rewards to his backers.

The first two issues of the comic were delivered to backers in greyscale. The current campaign includes an option for a full color graphic novel of the comic. “Coloring the comic was always a dream. The first few campaigns were profitable enough that I was able to put money back into the project to make it better for everyone,” said Kraft.

“Devin has an incredible model for completing Kickstarter projects and getting his rewards out to backers in a timely manner. His first campaign was shipped in 28 days. The second was shipped in 24 days,” said Brooks Johnson, Executive Producer at Cheshire Cat Studios. “He’s built up an incredible amount of support from his
backers and it’s great to see all of that hard work pay off on the final installment in the series.” Dragon Slayer is currently at 87% of its goal after only 6 days.

Dragon Slayer: The Collected Edition will be 136 full color pages, and will be a graphic novel containing an entirely crowdfunded story from start to finish. To learn more about the Kickstarter campaign, visit: https://www.kickstarter.com/projects/cheshirecatart/dragon-slayer-the-collected-edition.

The first two issues of Dragon Slayer are available to read here: https://www.etsy.com/shop/cheshirecatart.