BROKEN FRONTIER AT 20! We continue our series of ‘Inside Look’ creator commentaries today at BF celebrating both our ‘Six to Watch‘ artists and our 20th anniversary. Today’s subject is Dominique Duong who has gone on to be published in numerous anthologies including SelfMadeHero’s Catalyst. 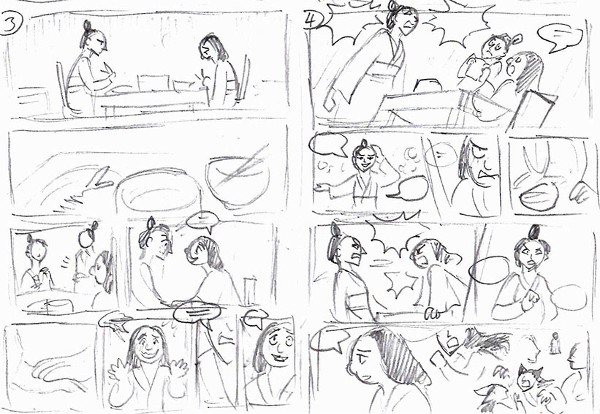 I originally first came up with the story of The Dog and the Cat as a pitch for a comic anthology about myths in the modern day. My pitch was accepted and was originally for a ten-page story. I set to work writing the script and thumbnailing.

However, at the start of 2020, the anthology was postponed indefinitely due to the personal circumstances of the editorial team. Then the UK went into lockdown in March 2020 and I suddenly found myself working from home.

My mind circled back to The Dog and the Cat, a story rooted in my culture, and which I’d been very fond of. I realised I still wanted to bring this story to life, and with freelance work drying up in the arts, now seemed as good a time as any to work on a personal project. Plus, now that I was no longer limited to ten pages, I could expand the story much further. 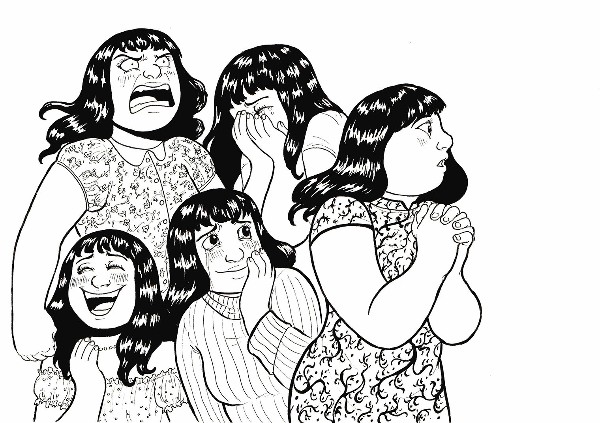 To begin with, I started drawing concept art for the characters of the Dog and the Cat. Although I may start off with an idea for a story, before I can really start writing about the characters, I need to put a face to them. For me, only then can they really start being fleshed out and developing personalities.

The Dog and the Cat is in a way an ‘opposites attract’ sort of romance, so I wanted the two of them to contrast visually to each other, as well as to reflect the nature of their animal selves.

The Dog was meant to be someone who was positive, cheerful and friendly in the way that dogs typically are, so I tried to make her look soft, cuddly and approachable.

On a side note, I made her dog form a white Shih Tzu the same as my old dog, Maya, who passed away years ago. Mum was always telling me I should do stories about her, but the Dog is very much not Maya in any way apart from breed and a love for food. She was still a very good dog, though (even when she was a diva) and I miss her. 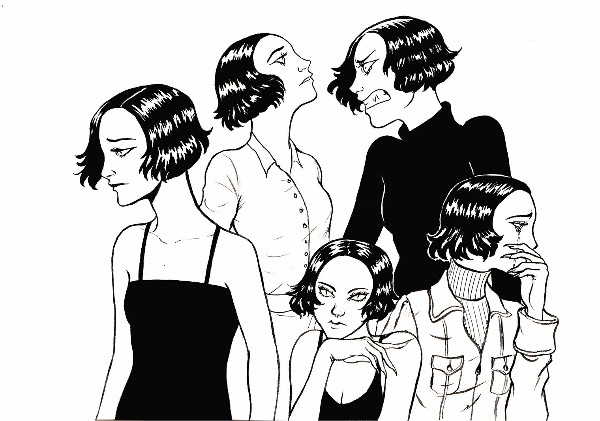 In the original myth of the Chinese Zodiac, twelve animals swam a race to determine the order of the Zodiac and the Rat got first place by hitching a ride on the Ox and jumping onto the riverbank right at the end. The story of the Cat in relation to the myth is less well-known, but essentially the Cat and Rat used to be friends, and the Rat betrayed the Cat by not waking them up on the day of the race, causing the Cat to sleep in and miss their chance. Since then, cats and rats have been mortal enemies (there’s also darker version of the myth where the Rat pushed the Cat into the river and the Cat drowned).

A lot of people are familiar to some extent (even if only vaguely) with the Chinese Zodiac, and there have been countless stories about it. Consequently, I liked the idea of looking at this lesser-known myth, and exploring the aftermath of the Cat’s original story and how such a betrayal would’ve affected her.

As such, I designed the Cat to be long, sharp and a bit severe-looking, reflecting her wariness and the natural aloofness of typical cats.

The Dog and the Cat cover 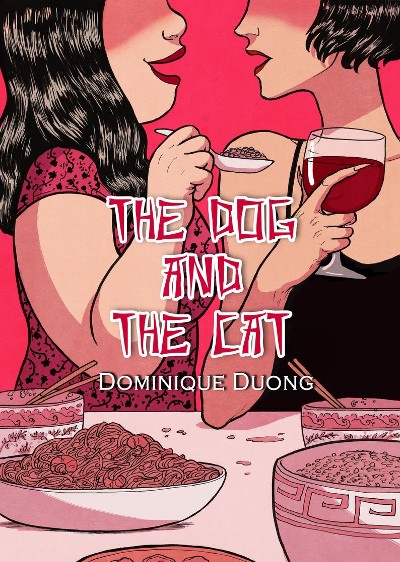 However, with The Dog and the Cat, I quickly realised this story just wasn’t one that was going to be best told in a black and white format, especially with the strong focus on food; it had to be in colour.

At this point, I still wasn’t very confident with colouring, so I compromised and settled with a monochrome (mainly) pink palette. It fit well with it being a romance, and it meant I didn’t have to break my brain quite to the same extent trying to figure out how to make the colours work together. 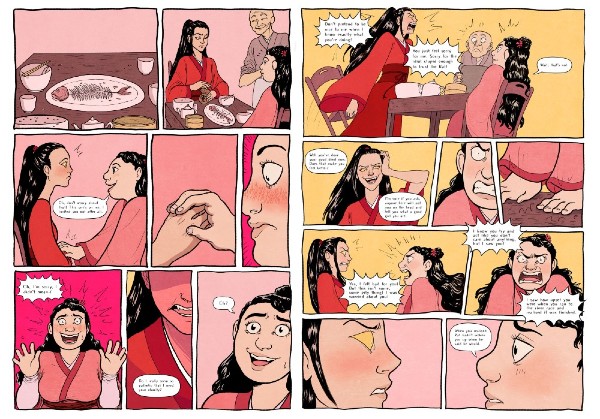 Pink was the main colour theme, but I did sometimes throw in other colours, most noticeably in the first big fight between the Dog and the Cat.

I wanted to differentiate the mood of this scene from the others (particularly as it got progressively more romantic), and thought a yellow background would suit it, both as a contrast and disruptor of the pink colour scheme, a signifier of danger and anger and also as a link to the Cat, for the Cat herself has yellow eyes and is the instigator of the fight. 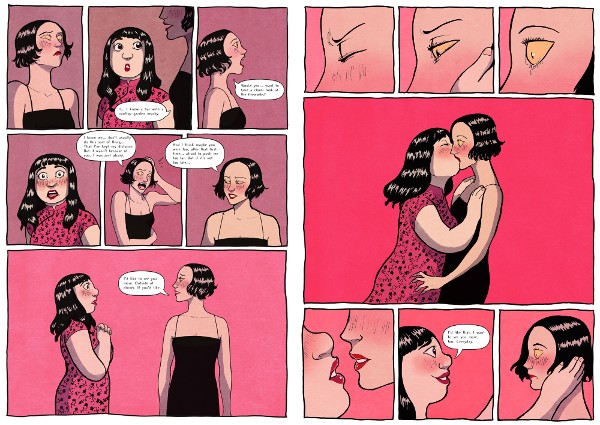 For my stories, it always comes back to the characters, and a character-focused story is a story I enjoy writing most (as opposed to anything almost entirely plot or quest-driven like The Lord of the Rings). For me, a story can’t live without characters to care about, empathise with or to at least be entertained by. I love writing about a character’s various neuroses, fears and anxieties, what drives them and what scares them, just how exactly life has hurt them, and whether the experiences in the story will break or make them anew. I love writing relationships between characters (romantic or otherwise), and exploring the dynamics that make each relationship unique, particular the mess, the difficulties, shared history and the misunderstandings that occur before a bond can start developing. What can I say, I like writing about damaged people.

Ultimately, The Dog and the Cat is a slow burn love story about the pain of being betrayed by someone you cared about, but how such pain need not be the end. It might not be an easy process, but trust can be rebuilt and new relationships formed, if you’re willing to open yourself up to vulnerability again.