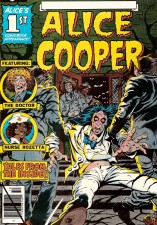 “We’re doing many cool things with Dynamite, beginning with a new comics series which I am very excited about.  I always say that the best thing about being in a comic book is that they draw you with great abs!” says Alice Cooper.  “Artistically, for me there is hardly a better medium.  There is so much you can do in the form of a comic that we’d never been able to do on stage.  It’s just a different way of storytelling, and it really has almost limitless possibilities.  We’re looking forward to stretching the existing boundaries of the comic medium again.  We have new stories to tell, but we’ll do it with the same theatrical, sinister sensibility that comes with the name ‘Alice Cooper’.  This is just the beginning!  Welcome to my NEW Nightmares!”

Renowned as the “Godfather of Shock Rock”, Alice Cooper is an icon of rock ‘n roll with a career spanning five decades.  A Detroit native, Cooper has released 26 albums over the course of his illustrious career, and maintains a reputation as one of the most theatrical live performers in history, often incorporating elaborate horror movie and vaudeville sensibilities into his stage shows.  In addition to his musical career, he is an avid golfer, film actor, restaurateur, and radio DJ.

Alice Cooper has been a subject and contributor to comic books over the years, first appearing as the centerpiece of a 1972 issue of Marvel Premiere.  As a companion to his 1994 concept album The Last Temptation, Cooper released a graphic novel of the same name, written by bestselling and critically acclaimed author Neil Gaiman (The Sandman, American Gods, Coraline) and illustrated by Michael Zulli.  Cooper also contributed a story in the Treehouse of Horror comic in 1995, a Halloween-themed spin-off from The Simpsons.

“Alice Cooper’s on-stage persona, the ultimate shock rocker, is perfect for comic books,” says Nick Barrucci, CEO and Publisher of Dynamite.  “From his first comics appearance in Marvel Premiere #50 to The Last Temptation by Neil Gaiman, I’ve enjoyed the appearances Alice has made in comics.  We are excited to develop captivating and hypnotic comic storylines that incorporate the Sinister Showman’s gothic flair and grandiose vision.  This is going to be one hell of a ride!”