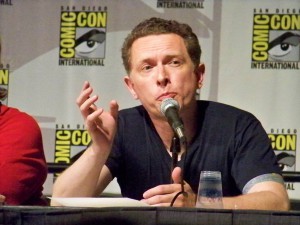 Dynamite is proud to announce that celebrated comic book writer James Robinson (Starman, Justice Society of America, Earth 2, Leave It to Chance) has signed a deal to create a new series entitled Grand Passion.  This partnership marks the first time that Robinson will work with Dynamite Entertainment to develop new content.

“I’m thrilled to be working with Nick Barrucci and Dynamite Entertainment on a series I think will surprise a lot of readers,” James said. “Grand Passion is definitely a departure from what I’ve been doing in the last few years.  This series is about two wayward characters Doc and Mabel — one a cop, the other a crook — who are fated to fall in love at first sight even as Mabel swears she’ll kill Doc if it’s the last thing she does.  It marries elements of a Harlequin romance with hard-boiled crime and takes it off in a direction that’s surprising, funny, violent, and sexy.  I’m very excited to roll up my sleeves and immerse myself in writing this tale.”

Nick Barrucci, CEO and Publisher of Dynamite, says, “I have known and been friends with James Robinson for nearly two decades, and wanted to work with him since the launch of Dynamite.  Between James’ exclusivity with DC Comics and our growing Dynamite, it took time to find the right project.  After some nice conversations, the right project came together.  I am thrilled to welcome James Robinson’s Grand Passion to comics retailers and fans.  This is something I’ve wanted to see happen for a long, long time.  I think the world of James — his imagination, talent, and detail to attention.  We’ll be releasing more information and art as they are ready, but prepare to see something completely new and unexpected from this fan-favorite, brilliant writer!”

James Robinson is a British writer of comic books and screenplays.  Perhaps best known for the DC Comics title Starman, he received tremendous critical and fan praise for his groundbreaking reinvention of an obscure hero into a beloved series deserving of an Eisner Award for Best Serialized Story.  An expert at revitalizing classic concepts with a fresh new look and perspective, Robinson has written acclaimed story arcs in such titles as The Golden Age, Justice Society of America, Batman: Legends of the Dark Knight, Hawkman, and more.  His creator-owned series Leave It to Chance won two more Eisner Awards in 1997, for Best New Series and Best Title for Younger Readers.  Additionally, he was nominated for an Eisner Award for Justice League: Cry for Justice.  He also wrote the screenplay for the 2003 movie version of The League of Extraordinary Gentlemen.