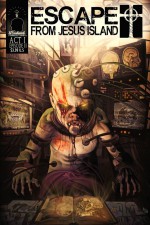 Due to the success of the Phantom Variant launch of Escape From Jesus Island #1, Wisdumb Productions and the Phantom Group have decided to do it again with Episode 2. Easter weekend, the second installment in the Apocalyptic horror comic book series will hit shelves for an exclusive two-week advance preview at Phantom stores in the US, UK and Canada before releasing wide on May 2.

The premiere issue caught the attention of horror legend Clive Barker, who gave the indie title a major boost with this endorsement:

“May I recommend a comic by writer Shawn French and artist Mortimer Glum. It’s called Escape From Jesus Island, and it has been created with immense love, commitment and vision. It’s almost like seeing a hyper-intense Italian movie for the first time: your mind will be blown. Please check them out.”

This creator-owned comic tells the story of an attempt to clone Jesus that goes badly off the rails.

“It’s kind of like Jurassic Park, except with cannibalistic, mutant Jesus clones instead of dinosaurs,” French said.

The Kickstarter-funded series will span 40 issues, broken up into five standalone Acts of eight issues each. More than forty fans will appear as characters in the first eight issues, either as mutants or their human victims.

“That was one of the things Mortimer and I decided very early on,” French said. “We wanted this comic book to belong to the fans who helped make it happen. So we take every opportunity to bring them into the story, either as characters or through Name The Mutant contests and such. One of our biggest Kickstarter backers, Steven Long, will appear as a major character in this story, the Antichrist’s bodyguard, Inquisition. His son even makes a cameo appearance in EFJI #2.”

Episode 1 of Escape From Jesus Island is on sale now at Amazon, JesusIsland.com and the EFJI Facebook page. You can find a map of stores carrying EFJI #1 by clicking here. 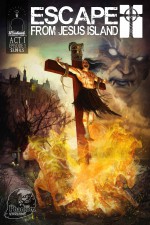