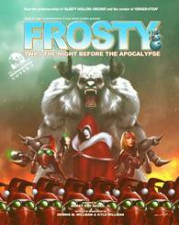 As the childhood song promises, he’ll be back again someday…and this version of FROSTY is back with an intergalactic universe full of aliens, elves, space monsters, robo-babes and more!   Thanks to their FROSTY EXPANDED UNIVERSE Kickstarter campaign, Dead of Night Entertainment and Iron Dead Studios have taken their multi-media project into the next phase of science fiction storytelling.  Having reached their goal less than halfway through the campaign, fans of “FROSTY: ‘Twas the Night Before the Apocalypse” now have access to trading cards and a forthcoming collectible card game experience. With less than 2 weeks left, they are on their way to hitting their 2nd stretch goal upgrade, adding another 9 card expansion to the current set of 27.  Akers has found that “Kickstarter is a great networking tool. Not only do you get the additional exposure, there’s the added benefit of financial support from your target audience. Over 90% of the funding has come from complete strangers. This campaign certainly opened doors for future relationships with top-notch printing companies.”

Perks for backers are still available and include an expanding trading card series (including autographed and foil effects as well as full series), exclusive Giclée art prints, books in the series, digital downloads and possibly the “coolest” reward of all – being immortalized as a character in an upcoming instalment!

“FROSTY” gives adults a new holiday tradition to call their own. And after devouring this first tale, readers may never look at Christmas Eve the same again!  In Bobby Ray Akers Jr and Dennis Willman’s festive adventure, the iconic snowman regales patrons of his favorite bar with the story of a massive yuletide invasion by industrious aliens. These invaders have passed judgment on the human race, and seek to exterminate the “offending” species and remodel their entire planet into a trans-galactic resort.  A lone human named Eve is held accountable for the shortcomings of her people and forced to bear witness to the apocalypse from the flagship.  As she works desperately to challenge perception of humanity to a council of the most powerful leaders in the solar system, a daring elf named Herbie is sent on a dangerous mission to save Eve, and in doing so, save the world.

“FROSTY: ‘Twas the Night Before the Apocalypse” is the first book in the flagship “FROSTY” series, featuring Akers’ freakish snowman as the Master of Ceremonies.  Each successive book in the series will give a bizarre twist to a classic holiday theme.  In this case, Willman put his spin on the timeless Christmas poem “‘Twas the Night Before Christmas,” by Clement Clark Moore.

“FROSTY” is an homage to the great science fiction films and stories of the ‘50s and ‘60s.  Taking inspiration from “Mars Attacks” and “The Nightmare Before Christmas,” Akers & Willman create a new and unique look for their multi-media hybrid.  One of the unique aspects of this project is that it reads like a storybook, with the introduction and ending in comic book form.  As with their previous efforts, a modeling cast was utilized, including film composer Harry Manfredini (“Friday the 13th”) and the “Queen of the B Movies” icon Julie Strain (“Heavy Metal,” “Vampirella”).  A full list of modeling cast is available on their website.

FROSTY: ‘Twas The Night Before The Apocalypse is available online now through Createspace.com, Amazon.com and Barnes&Noble.com worldwide in two cover options.  Akers & Willman recently released “The Vengeance of Sleepy Hollow: Origins,” a graphic novel re-imagining of the classic tale of the headless horseman also available online.  Both will be available to purchase at Akers’ Wizard World St. Louis appearance April 4-6, 2014 at America’s Center.