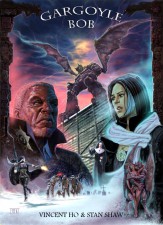 The creative team behind the Gargoyle Bob franchise announced today a Black Friday special to boost their Kickstarter campaign for their graphic novel about a Chicago cop who must become a gargoyle to save the world from an undead horde and overdue Mayan apocalypse. Gargoyle Bob started as a script that won BEST SCREENPLAY at the NYC Horror Film Festival. Vincent Ho (E. Motion Express) and Stan Shaw (Fried Green Tomatoes, Harlem Nights) have teamed up with Ted Boothanakit (Diablo III, Spiderman 2, EuroTrip, The Hangover) to create the art for the series.

Want free books? Donate on Black Friday at http://www.kickstarter.com/projects/1602073855/gargoyle-bob and get a free digital copy of Gargoyle Bob. You will receive this free copy REGARDLESS of the success of the campaign.

Shaw explains, “This book is a labor of love. I know that there are a ton of kickstarters out there and I know that all of them aren’t going to get funded. I am from the city of broad shoulders and I know you don’t get something for nothing so we wanted to give fans new and old a first hand look at our property.”