Last week’s Image Comics press release announcing the 50th issue of Richard Starkings’s Elephantmen series instantly made me walk to my stacked graphic novel cupboard and pull out one of the favorite oversized hardcovers in my collection: the limited edition of Hip Flask: Unnatural Selection.

The deluxe hardcover from Active Images tells the origin story of Hip Flask, Elephantmen’s big lead – and believe me, when your book’s star character is a two-ton hippopotamus, ‘big’ really means big. Hip is one of the most intelligent and good-natured of all elephantmen, working as a private detective for the Information Agency, a government law enforcement organization. His proper manners are a stark contrast with how he came into the world though…

As Unnatural Selection unveils, Hip and his fellow hybrid manimals were created by weirdo Japanese scientist Kazushi Nikken, head of the MAPPO Corporation. Attempting to brainwash and manipulate them from birth onwards, Nikken wants them to become the next breed of soldiers capable of mass destruction. I won’t spoil the story for you, but it’s safe to say that the surviving elephantmen eventually succeed in breaking free from MAPPO’s captivity, after which they look to find their place in society as it is in the 2260s. And thus the stage for Elephantmen is set. 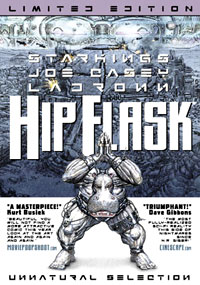 No doubt about it, the real draw of this book is the impeccable art of José Ladrönn, whose talent we see far too seldom in comics anymore. His gorgeous widescreen panels and splash pages are more than worth the price of admission and make this sci-fi world come alive right from the opening page. They’re so beautiful in oversized format that you’ll find yourself flipping through the book time and again after you’ve finished the story. This edition for me has the feel of a Humanoids publication, but one created originally for the US. Ladrönn’s work is so good that he was awarded an Eisner in 2006 for his work on a future Hip Flask story, Mystery City.

Unnatural Selection is your perfect launching pad to thrust you into the world of Elephantmen, so if you want to get in on the ground floor before the anniversary bash hits in July, do yourself a favor and pick it up… if you can still find it (if not, there’s a 10th Anniversary Edition on the way for August). The story is also available as Elephantmen #0, which in turn is included in the first Elephantmen trade, Wounded Animals. More info on the Active Images website.