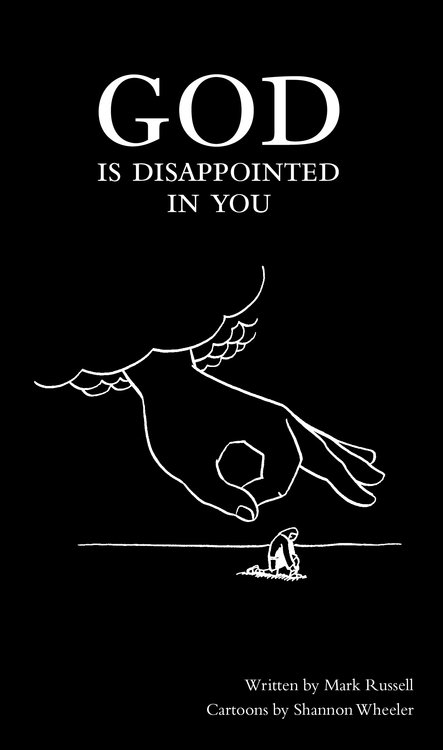 For those who have read the Bible, and those who haven’t, this provocatively titled book lets you know that it’s actually a strangely funny read.

Beyond being known as the world’s most popular (and probably most mocked, most misunderstood, and most loved) book, the Bible is essentially a collection of stories that tell one big story about God’s relationship with humanity.

Comprising 66 smaller books within the Old Testament and New Testament, as a narrative it is also ripe for adaptation and interpretation, as the recent record breaking History Channel miniseries reminds us. Like the works of Shakespeare, or Austen, or Philip K. Dick, the Bible is a regular font of inspiration for various entertainment media, and as a storytelling device, it has a richness of memorable people and crazy events to inspire many creative types.

Author Mark Russell formulated God Is Disappointed In You after he summarized the Book of Job in three paragraphs for a friend, and wondered if he could take the same approach to the entire book. It took three years, a lot of research, some serious discussions with scholars and pastors, and this offering from Top Shelf is the entertaining result.

Similar to Jason Boyett’s Pocket Guide to the Bible, it is a candid look at what the Bible contains, in an often unique and hilarious fashion.

The cheeky cover art and bold title will undoubtedly turn some off, and being a Christian myself, I had some hesitation, but this book cannot be judged by its cover. In fact, as Russell points out in his heartfelt epilogue, he found his original drafts were surprisingly welcomed by most believers he gave them to. That won’t be the reaction of every reader, but as Russell makes clear in the prologue, his intent is not to mock, or revere the Bible, but to examine it as it is with a cheeky glint in his eye. In essence, if you don’t have a sense of humour – this book is not for you.

Rather than a standard book, God Is Disappointed In You takes a different approach to formatting, depending on each of the 66 books. The majority of the New Testament is comprised of letters a man called Paul wrote to various churches that were formed after Jesus’ death and resurrection, and for those books the format remains the same here. For other books, Russell mixes things up. For example, Habakkuk is written as a Q and A between God and His people, Leviticus is a memo to the people of Israel from Moses, Psalms is written as a commercial for King David’s Greatest Hits, Songs of Solomon is like the monologue of a lovesick teenager, Isaiah is an encouraging speech from a motivational speaker, Nehemiah is a journal from the titular construction supervisor, Hebrews is an FAQ, and so on. Most of the books though are written with Russell’s funny summary approach, making the whole book quite a joy to read, with its casual, approachable, and fast paced style. Make no mistake, this is a funny book. To use the modern vernacular, I LOL’d several times, not because Russell is going for cheap, hurtful laughs, making fun of what the Bible contains, but because he reminds us that there are some astounding acts of foolishness, stubbornness, and just plain weirdness in the original text, as the countless books in the humour section of your local Christian bookstore will attest, as will the funny preachers and stand-up comedians that America seems to regularly produce.

Black and white illustrations from New Yorker cartoonist, and creator of Too Much Coffee Man, Shannon Wheeler accompany Russell’s text every few pages. They’re simple, one panel renderings reflective of the era that work well with each book Russell examines, and although they’re not quite as hilarious as Russell’s words, they are rather charming and offer a different viewpoint of events, such as a man eating breakfast exclaiming, “Guess what? God came to me in a dream and told me that it’s cool to eat bacon!” or a fiery gent shouting, “Our religion is about love, you moron!” God is shown as a giant man with a beard, and there are pictures of people in sandals, angels on clouds and the like, as we’d expect.

Fundamentally Russell understands the message of Jesus, but has an unnecessary need to use profanity. Throughout the book, the occasional swear word pops up, but to see it coming from the mouth of God and Jesus was an unwise choice. However, Russell gives consideration when speaking about Jesus, such as this cheeky missive, “Jesus was a mixed-race child, the son of his human mother, Mary, and his father, God. One of the side effects of having God as his biological father was that Jesus possessed magical powers, which often proved useful.” When it comes to summarizing the words Jesus spoke, Russell thankfully shows respect and quotes Christ almost word for word in some cases, and Top Shelf have printed those words in red text, like most editions of The Bible. He sometimes extends the same approach when writing about Jesus, like this little nugget of truth – “As he hung there dying, they beat and mocked Jesus for being so naïve as to waste his time on pathetic and misguided ideas like forgiveness. For which he forgave them.”

Getting the character of Jesus was vital, as his actions and interactions fill a lot of the New Testament. He hung out with lepers, prostitutes, and the homeless, which made all the snobby religious types hate him even more, as he was a man of the people, and Russell reveals that approachable Jesus on the page.

There are pop culture references scattered throughout, such as when the Holy Spirit is likened to the George Harrison of the Holy Trinity, but Russell doesn’t rely solely on such comparisons for a laugh. Historical epics flowing with sex and violence didn’t originate with Game of Thrones, as any of the raw, shocking, and downright strange events of the Old Testament show, and the sheer diversity that the Bible contains is more than enough material for some rib tickling productions, as can be seen in a handful of early episodes of The Simpsons, or in Monty Python’s The Life of Brian film. Admitting that the Bible is filled with characters and events ripe for humour, without degrading what it represents is a tricky business, but Russell and Wheeler handle it delicately, and delightfully.

The Bible is not just a list of do’s and don’ts, or fanciful fairy tales. It must be looked at in the historical context, including all the rules God set for His people that Jesus eventually did away with, and that’s where a lot of the humour comes from. Russell does well to use this as a basis for the majority of the witty text. At times God seems a grumpy, childish, moody being, but it never turns into a God bashing book, as it also reveals Him to be a patient, protective, and generous being. Much like the book that inspired it, God Is Disappointed In You should be read as a whole, with an open mind, and with a readiness to embrace the sheer wackiness that fills the odd page.