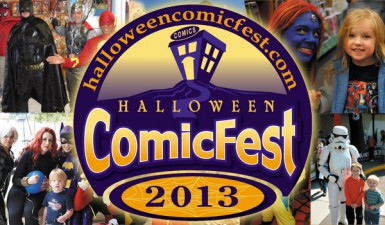 After the success of last year’s  inaugural Halloween ComicFest, Diamond Comic Distributors is pleased to announce the return of the industry-wide collaboration and the line-up of comics for the 2013 event.

Halloween ComicFest is the biggest celebration of Halloween-themed comics taking place at participating comic shops in North America and elsewhere on the weekend before Halloween, October 26th and 27th. During that time, adults and kids can go into their local comic shop and get free comics and mini-comics published specifically for the event. Many retailers will be planning special HCF activities, costume contests and more for their stores.

“This year we have 16 publishers creating Halloween themed comics and mini-comics for the event,” said Diamond’s Director of Marketing Dan Manser. “There are 11 new full-sized comics and 11 new mini-comics being released with titles such as Batman, Sonic the Hedgehog, Thor, Archie and many more all written with a Halloween twist.

Designed to celebrate comic shops as active Halloween destinations and to reach new customers, Halloween ComicFest helps retailers and the entire industry springboard into the year-end holiday selling season. Retailers and comic fans will have the chance to pass out comics instead of candy this year with mini-comics also available to purchase in bundle packs.  In the August issue of Diamond’s PREVIEWS catalog, retailers will find complete details on how to participate, including the specially published comics and mini-comics and promotional items available to order for the event.

ACTION LAB COMICS| VAMPLETS: THE LEGEND OF THE GHOST PONY

Skyward: Into the Grim—HCF 2013 EDITION

Terror lurks at every turn in this sneak peek at the darker, creepier corners of our heroes’ world. Enter: the Grim! From Harvey award winner Jeremy Dale (G.I. Joe, Wildguard, Marvel’s Kapow!), this is not to be missed for Skyward fans new and old.  Plus, the return of Action Lab’s flagship superhero title, Fracture!

It’s a Halloween Sonic Fest! Just in time for the launch of the newest smash-hit SEGA video game comes the way-past-coolest video game primer issue exclusively for Halloween Comic Fest 2013! Hitch a ride alongside the truest, bluest hedgehog around as this timeless video game icon takes on the biggest baddies of them all with his faithful pal Tails at his side! Hot off the heels of the titanic, Sonic/Mega Man: Worlds Collide summer blockbuster, Sonic comics have never been hotter! Now is your chance to check out the next big thing from the one and only “blue blur”!

The past and present collide in this special Soulfire Halloween issue! In celebration of Soulfire’s Tenth Anniversary, Aspen is proud to present to you this special edition Soulfire issue, Soulfire: Genesis! Showcasing the original Soulfire Zero issue by the acclaimed Jeph Loeb and Soulfire creator Michael Turner, along with a first look preview at the upcoming all-new Soulfire series (debuting in November!) by newcomer V. Ken Marion and longtime Soulfire writer J.T. Krul, this incredible Halloween Comic Fest issue is not to be missed! Jam-packed with two awe-inspiring Soulfire stories from the past to the present, every comic fan will want to make sure this Aspen goodie goes home with them for the holiday!

Disenchanted is a stunning new webcomic from writer Simon Spurrier that will be collected twice per year, following the model of Freakangels. Once they were the mainstay of folklore: goblins, leprechauns, pixies and fey. But now? Dispossessed, forgotten, doubting even their own traditions, they’ve trickled into Vermintown, a vast and vile city of a million inch-tall malcontents. Sprawling through an abandoned subway station deep beneath London, here myth has given way to sleaze, drugs, gangland violence and interracial hatred. Vermintown is where magic went to die.

Just in time for Halloween, fans of all ages can get this FREE special edition of the critically acclaimed series featuring art by Dustin Nguyen! In this issue, Robin needs Batman’s help to learn the true meaning of Halloween. Plus, on Thanksgiving, Batman and Robin join the families of Gotham City around the table for a holiday feast—and birds of a feather flock together to stage a march against the city led by The Penguin!

Just in time for Halloween, fans can get this FREE first chapter of the critically acclaimed graphic novel that pits a young Batman against a killer who only murders on holidays. Can The Dark Knight discover the killer’s identity before he strikes again?

Three sample stories of the heavy hitters in IDW’s brand-new Cartoon Network line-up! First up, the Powerpuff Girls take on “The Big Green Monster,” then Samurai Jack finds himself in a game of “Double Dutch Death Valley,” and finally Ben 10 gets into a bull fight in “Olé.”

Throughout the ages, the gods of the Marvel Universe have been vanishing, their mortal worshippers left in chaos. Now, the Mighty Thor follows a trail of blood that threatens to consume his past, present and future selves. The only hope for these ravaged worlds lies with the God of Thunder unraveling the gruesome mystery of the God Butcher! (Age Rating: T+)

Straight from the hit Disney XD show comes “The Comic Book You Can’t Miss Out On”! By Day, he’s Peter Parker, mild-mannered high school student. But by night, he’s the ultimate in super heroics — Spider-Man — and he’s just the beginning of a super-hero

Kurouzu-cho, a small fogbound town on the coast of Japan, is cursed. According to Shuichi Saito, the withdrawn boyfriend of teenager Kirie Goshima, their town is haunted not by a person or being but by a pattern: uzumaki, the spiral, the hypnotic secret shape of the world. It manifests itself in everything from seashells and whirlpools in water to the spiral marks on people’s bodies, the insane obsessions of Shuichi’s father and the voice from the cochlea in our inner ear. As the madness spreads, the inhabitants of Kurôzu-cho are pulled ever deeper into a whirlpool from which there is no return!

Ransom Riggs’s haunting fantasy bestseller adapted to a graphic novel! A horrific family tragedy sets sixteen-year-old Jacob on a journey to a remote island off the coast of Wales, where he discovers the crumbling ruins of Miss Peregrine’s Home for Peculiar Children. As Jacob explores its abandoned bedrooms and hallways, it becomes clear that the children were more than just peculiar. They may have been dangerous. They may have been quarantined on a deserted island for good reason. And somehow-impossible though it seems-they may still be alive.

Vamplets: The Legend of the Ghost Pony—HCF 2013

In this terrifyingly sweet installment, Rasket the Stinkless Stinkbug tells a bedtime story sure to send chills of joy through your spine! The Ghost Ponies have been the harbingers of the weird for years. Whenever they appear, creatures near have disappeared,  never to return. Where do they come from? What is their terrible secret? Find out here, in The Legend of the Ghost Pony!

Despite being a zombie, Bill Stokes has become quite good at maintaining his mediocre grade point average, keeping a low profile, and gaining online notoriety as a top competitor in the pro-gaming world.  But now, Bill’s dad is back!  Released on legal technicalities from his insurance fraud sentence, Dad’s out to get even with Mom and Bill for exposing his schemes!  How is Bill going to keep his and Mom’s zombie-ness from being revealed to the world?

Elmo decides to become a superhero, but he doesn’t have any powers! It will be up to the always lovable Super Grover to teach Elmo that he can have any superpowers he wants, because he already has the greatest superpower of all… imagination!

It’s Halloween in Pantalones and everyone is ready to go trick or treating, but Bucky can’t eat any candy because of a dentist appointment! He stashes his candy in his piñata for safekeeping, but on Halloween, piñatas that are fed come back to life. Chico is the first victim and becomes a Zombie Piñata — a ZomBiñata! — and the rest of the gang must figure out how to turn him back before they turn, too. The only tools on their side are toothpaste, costumes, and lots of candy — but which one will save them?

Archie’s Pals ‘n’ Gals is a great mini collection of hilarious stories from Archie’s past and present! Featuring two great stories, fashion pin-ups, puzzles, games and more! This book is a fantastic starting point for new readers and a great refresher for long time fans!

Magic Man is being a giant meanie! All the Princesses wanted was a nice picnic with nothing going on for once, but don’t worry! Finn and Jake are here to save the day…or are they? When Magic Man uses his tricks against our favorite heroes, it’s up to the Princesses to save the day! This stand alone issue is definitely a must have, filled with girl power and emoticons!

A ghost named Rasputin has been spotted! And Hellboy and the B.P.R.D. are going to find out what he’s up to. Who is Hellboy anyway? Why does he have such a big hand and what is it used for? Who’s weirder, him or his friends? What is the B.P.R.D.? And what does chicken soup have to do with all of it? This and more are answered in the debut issue, where BIG things happen to itty bitty Hellboy! A new kids’ comic by the creators of Tiny Titans, Superman Family Adventures, and Aw Yeah Comics!

Relive some of the most fun moments from IDW’s first year of My Little Pony! Featuring amazing Pony art, great back-up stories and other rarely seen material! The perfect treat to pick-up for all ages readers this season!

Robert Kirkman’s Super Dinosaur comes to Halloween ComicFest with this special issue, perfect for all ages, packed with action, adventure, super science, and a talking dinosaur with robotic arms! It just doesn’t get any better than that kids!

One of Mandy’s Sketch Monsters has escaped from the pages of her sketchbook, and it’s terrorizing the whole city! Good thing Mandy’s dealt with this situation before. All she has to do is feel the same emotion she felt when she first drew it. But she has no idea what she was feeling when she drew the 100-foot booger monster! It’s growing bigger by the second, and if she doesn’t figure it out quick, there’s snot much she can do about it!

When he was ten years old, Ben Tennyson discovered the Omnitrix, a device that saves and catalogs DNA and then can distribute those powers and attributes to its owner in times of need. Ben becomes a superhero, battling the forces of evil for the next 15 years. Now living in Undertown, a hidden alien community on Earth, sixteen-year-old Ben is saddled with a new partner Rook, a by-the-book plumber, an elite team of space-cops, and is tasked with patrolling Undertown to keep it safe and, you know, saving the universe when it needs it!