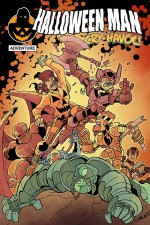 Solar City’s monster-bashing undead hero has a lot to be happy about as he enters his 13th year. Halloween Man creator Drew Edwards has signed a deal with Kerry Gammill’s Monsterverse Entertainment that will help the independent comic reach its broadest audience yet. Not only will Monsterverse be presenting the vast back catalog on Comixology and other digital outlets, but the Halloween Man creative team is also hard at work crafting new tales for a monthly Halloween Man digital comic.

For those unfamiliar with the character, Halloween Man began life over a decade ago as a web comic. Now in the era of digital download, the horror hero will enter a new stage in his life. Monsterverse will first digitally release Halloween Man’s crossover with Hack/Slash, followed by the graphic novel Superdeformed, which features art by Nicola Scott and David Baldeon, and an all-new tale that dives into the world of high fantasy, entitled Cry Havoc!

A return to print is also underway for a new one-shot adventure in 2014. “We’re excited to be a part of such an amazing line of horror-centric comics” says creator Edwards. Monsterverse also publishes the anthology series Bela Lugosi’s Tales from the Grave and the Hammer Horror tinged Flesh & Blood. For more information on Halloween Man and Monsterverse Entertainment, please check out the links below. 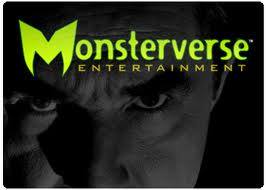