Difficult to be thinking about Halloween as we endure the hottest July on record in the UK. But a number of books debuting around the spooky season with a supernatural theme are already being announced, including a new miniseries for that pinnacle of horror/adventure Hellboy. Full details of Hellboy in Love in the press release below.

An All-New Miniseries On Sale Featuring Occult Adventure and Unlikely Romance From Dark Horse Comics This October, Just in Time for Halloween 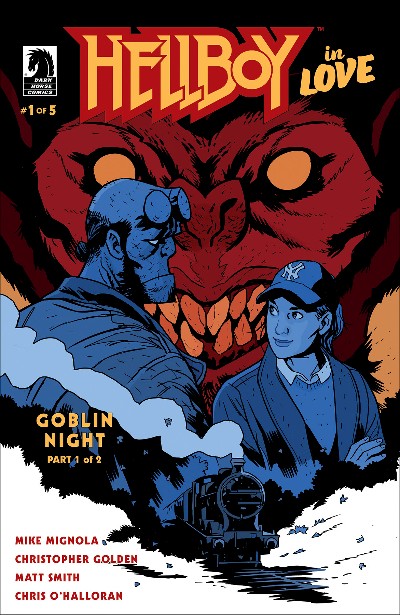 This October Dark Horse Comics will publish Hellboy in Love, an all-new five-issue comic book series featuring occult adventure and unlikely romance, by legendary Hellboy creator Mike Mignola, bestselling novelist Christopher Golden, award-winning artist Matt Smith, colorist Chris O’Halloran, and letterer Clem Robins. In the series’ opening tale, the two-part Goblin Night, Hellboy has been assigned to protect a shipment of occult artifacts from a gang of thieving goblins. The artifacts are being transported by train to the British Museum by archaeologist Anastasia Bransfield, and she’s not going to let them go without a fight! Rather than stay behind, she teams up with Hellboy to chase the light-fingered fey through the British countryside and into . . . a local punk show?

“It’s been twenty-five years since Dr. Anastasia Bransfield first appeared as Hellboy’s ex-girlfriend in my novel Hellboy: The Lost Army,” says Golden. “I’ve always thought one of the reasons Mike considered my three Hellboy novels as canon is because of that relationship. Over the years we talked many times about telling the stories of their adventures together, and the day has finally come. It’s Romancing the Stone-style action, occult weirdness, and first love, with gorgeous Matt Smith art! We’re having so much fun!”

‘‘It starts with a goblin train robbery in the English countryside. There’s also a punk show. These were the first words Christopher Golden told me about the story he and Mike put together, and that’s really all I needed to hear,” said Matt Smith. “How could I not be stoked to draw this thing? I’m very grateful to be back with the same creative team as Hellboy: The Bones of Giants.”

Hellboy in Love #1 will be published by Dark Horse Comics on October 12, 2022, just in time for Halloween. Be sure to follow Dark Horse Comics on social media for more news, announcements, and updates all throughout the convention. Join us in sharing the news and excitement with the tags @darkhorsecomics and #DHSDCC22!