Hot on the heels of their double Broken Frontier Awards win this week we have the first press release of the year from publisher Fantagraphics. Details of Hogbook and Lazer Eyes below. 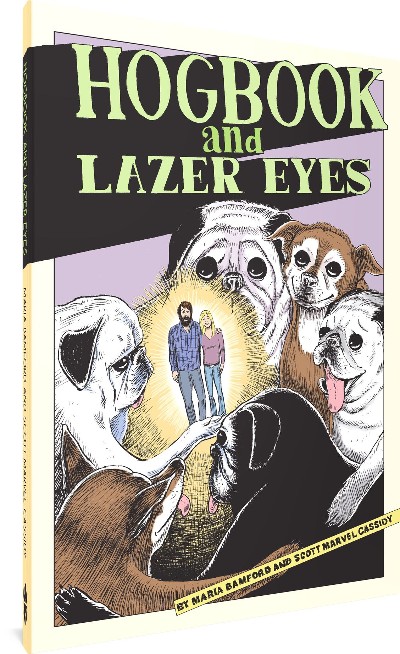 Fantagraphics is proud to announce the world-wide publishing rights to Hogbook and Lazer Eyes by comedian Maria Bamford and painter Scott Marvel Cassidy.

As recounted in Bamford’s buzzy Netflix series Lady Dynamite!, newly single fortysomethings Maria Bamford and Scott Cassidy each signed up on the dating site O.K. Cupid, under the respective usernames “Hogbook” and “Lazer Eyes.” They went on a date, and then another, and soon, despite a history of Bipolar II disorder and unhealthy relationships, they fall in love and are married in 2015. We view all of this through the prism of their pug housemates.

“As a dog lover, and as a comics fan, I was immediately charmed by Hogbook and Lazer Eyes from almost the first page,” says Fantagraphics Associate Publisher Eric Reynolds. “Maria and Scott have crafted something as sweet and beautiful as it is laugh out loud funny.”

Maria Bamford is a world-renowned actor and stand-up comedian. She’s widely acclaimed for her unflinching dark humor about topics like her dysfunctional family, mental illness, and as she calls it “unwanted thoughts syndrome.” Her hit show, Lady Dynamite!, ran for two seasons on Netflix and was heralded as a banner for public representation of those who struggle with bipolar disorder. Hogbook and Lazer Eyes is her debut graphic novel.

Scott Cassidy is known for producing remarkable work in Los Angeles over the last 20 years. Ranging from conceptual sculptures to absurd audio collages to the masterfully oil paintings, Cassidy has established himself as bold voice in the art world.

Cassidy’s fine art training translates with ease into graphic storytelling, with a naturalistic illustrative style that is a pitch-perfect match to Bamford’s comedic timing, making Hogbook and Lazer Eyes a beautifully illustrated love story, told by some incredibly charming pugs.

Hogbook and Lazer Eyes will be released in June 2023.