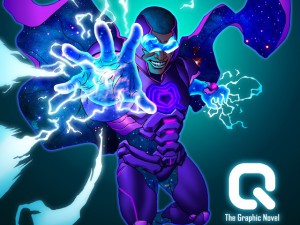 Raising $29,000 in 30 days for what may be the next Big Super Hero Graphic novel is no small feat, but a local San Franciscan has created something that just might go beyond his wildest dreams.

Odis Chenault of Kelon Productions has created what some are calling the next; forget Black Super Hero, but possibly the next Super Hero franchise period. More than just an average Graphic Novel, “Q”, not only grabs readers attention with the jaw dropping art by the Award Winning Artist and Colorist at 133art Studio, but the story itself takes readers on a non-stop thrill ride through the Milky Way.

“A man from Earth is chosen by the “Living Galaxy” to receive amazing powers. Two days later the Earth is conquered and he is forced to decide between saving the Earth or billions of other worlds. He must make his decision while trying to survive in a series of elimination matches against some of the galaxies most powerful fighters. With a “Living Galaxy” that handles problems by giving power to an individual in an “Affected Area”, “Q” creates a new dimension for Science Fiction Super Hero novels. Twisting story lines keep readers engaged and an array of amazing characters with converging story arcs keep the suspense building throughout.

“A dream come true”, for comic book, super hero and science fiction fans? Yes, but without the funds to take their project to the next level it might take years before their product can leave their drawing boards.

After mounting pressure from some loyal sci-fi fans, and friends and family to complete the book, Odis knew he had to find a way to get it done. But he soon realized with the expensive cost for art work, and printing looming, it may require him to put his graphic novel project on hold until he could raise the funds to produce it. Determined to push through the financial road blocks, Odis attempted to pay for the art work one page at a time. However, “being responsible for the obligations of taking care of my family in this economy makes it almost impossible to finance this project on my own,” says Chenault. This is why he’s decided to run a Kickstarter campaign, to try and crowd-source the $29,000 necessary to continue the art work, and publish the book.

Kickstarter campaigns operate under an “all-or-nothing” funding model so if the “Q” Graphic Novel project doesn’t reach its goal at the end of 30 days, Odis Chenault goes home empty-handed.

Please follow their progress and make sure to spread the word to your social media networks. Consider donating as little as $1 to help their project come to life. If you decide to donate more, you might be among the first in the world to receive the Hard Cover Edition of this awesome Graphic Novel.