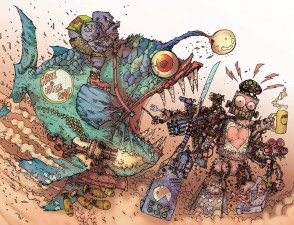 A story of a little robot in love and full of bullets, blood and BIG sharks, that is the first story of a long series that announces the international expansion of the comic books publishing house BookMaker Comics, which debuts in the English language at the F.A.C.T.S.-convention in Belgium (Oct 19/20 2013).

If you pick up the first English version (before the Diamond Comics release in March 2014 at the F.A.C.T.S.-convention you can join in the fun with the authors of the comic book Stefano Cardoselli (Heavy Metal Magazine, Simon & Schuster, 2000 AD) , Valeriana Cretella (Arcana Comics, Aurea ed)  and Angela Tittarelli (Aurea ed.).  Bookmaker Comics is ready to conquer the world! Will you join in on the fun?!

Just FYI: at the FACTS-con you can get a little sketch with the purchase of the book and a print or shirt.