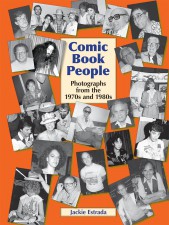 Longtime comics industry insider Jackie Estrada is running a Kickstarter campaign to fund her book Comic Book People: Photographs from the 1970s and 1980s. The book offers a unique peek at the early days of comics conventions before they were big pop culture events, when the giants of the industry mingled casually with their peers and fans.

The high-quality hardcover coffeetable book will feature some 600 candid photos of comics creators taken in the 1970s and 1980s, along with commentary and anecdotes about each person.

According to Estrada, the book combines two of her lifelong passions: comics and photography. She has been a comics fan since the 1960s and has been to every San Diego Comic-Con, as well as to numerous other comics, science fiction, and similar fan events over the last four decades. Her involvement in comics has included editing publications for Comic-Con, serving as the administrator of the Will Eisner Comic Industry Awards since 1990, serving as president of Friends of Lulu, and being the co-publisher of Exhibit A Press, which produces her husband Batton Lash’s Supernatural Law graphic novels. Exhibit A will publish Comic Book People as well.

Estrada’s passion for photography also goes back to the 1960s, when she learned to shoot and develop film in college. In the mid-1970s she began serious study of photography and became part of the local San Diego photography scene.

Her photos of comics creators have appeared in numerous books and publications, from Paul Levitz’s 75 Years of DC Comics and Julius Schwartz’s autobiography Man of Two Worlds to Alter Ego and Comics Buyer’s Guide. Most prominently, dozens of her photos were used in Dark Horse’s Comics: Between the Panels and in Comic-Con: 40 Years of Artists, Writers, Fans, and Friends. Most recently, her photos could be seen in the PBS special on the history of superheroes.

“I had the opportunity for thousands of my negatives to be digitized in high-quality scans, and I thought this would be the perfect time to put together a book,” says Estrada. “To make it manageable, I’m focusing on shots from the 1970s and 1980s. But it’s still going to be hard to narrow the choices down.”

The book is projected to be 160 pages, with mostly black-and-white images but a 16-page color section. Estrada’s goal is to raise $18,000 to cover the costs of design, production, printing, shipping, distribution, and backer rewards.

Among the premiums being offered to Kickstarter backers (and the backer levels are all named after fictional photographers in comic books and comic strips, such as Peter Parker and Vicki Vale) are postcards of images from the book, a 16-month calendar, and a rare 1986 Comic-Con poster featuring a collage of Jackie’s pictures.

The Kickstarter campaign can be found here: http://www.kickstarter.com/projects/1472315988/comic-book-people-photographs-from-the-1970s-and-1

Note: The cover image is a mock-up; some of the photos may change.