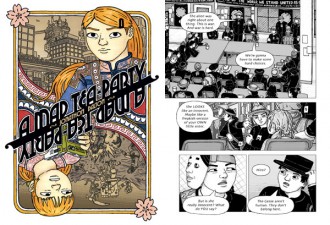 A Mad Tea-Party is the story of Connie and Matilda Sakura- two perfectly ordinary girls who just happen to be genetically engineered. Their parents fought a war against giant alien robots and saved the Earth from being invaded. But now it’s the girls’ turn to deal with the post-war political fallout. Connie has been kidnapped by teenage revolutionaries and Matilda has to rescue her, even though she’s the one who doesn’t have any useful genetic enhancements.
A Mad Tea-Party will be Jonathon Dalton‘s second self-published graphic novel. The first, Lords of Death and Life, won a Xeric grant in 2010. Jonathon has also had several short stories published in anthologies, one of which (Lil’ Ulysses in Chicago) was listed as “notable” in the Best American Comics 2010 anthology from Houghton Mifflin. When not making comics, Jonathon is an elementary school teacher in a town just outside of Vancouver, Canada.
Jonathon began working on A Mad Tea-Party in 2004, and he has been posting it online as a webcomic since then. The graphic novel will bring the entire story into one 288-page volume, with many revisions and new additions. The book can be pre-ordered for $22 before November 23rd, when the Kickstarter ends, and will be deliverable to backers by January.