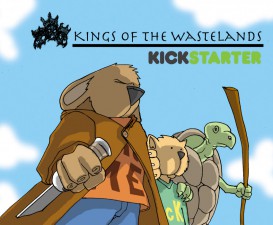 One of the last living dogs in a post apocalyptic wasteland, Jacob is driven to seek vengeance for the violent death of his family. The Kings of the Wastelands was created by Del Hewitt Jr. an Atlanta based Illustrator who desperately wants to see his vision printed for the world to hold in hand. Starting a crowd funding campaign was a natural progression to raise the funds needed for printing.

When Delbert Hewitt Jr. was brainstorming on his next move for creating a comic series, After Ebony Kiss his first comic book endeavor was picked up by Hound Comics, Delbert created The Kings of the Wastelands.  Initially created as a web comic series, Delbert has bigger aspirations for the series. Envisioning the series animated, Delbert decided to print the web comic series to have the series tangible and in the hands of the masses. Unfortunately printing costs are pricey and turned to kickstarter to help raise the funds needed to print the series. If higher goals are met, getting the entire first issue colored!

“I decided I wanted to have my creation to be something physical and in my hands. I grew up reading comic and flipping the pages. There is something indescribable about that feeling.” Says Hewitt. He spends a large portion of his time honing his skills at the drawing table, to prepare for this very moment.

He continues “I hope to use the goal to self-publish 24 pages of story by February. The $1,000 will help me pay printing costs, kickstarter fees, taxes and shipping expenses. The goal is to have the PDF at the printer by early January and have the books in hand by February. Money raised beyond two thousand will be used to pay for coloring and printing issue two! You get more comics if more money is raised.”

Anyone is welcome to invest in the campaign, with perks increasing by donation size. Offering everything from mailed hard-copy of issue one to a signed painting by Hewitt himself, a number of rich incentives are available for those who back his dream.

To date the project has seen a steady stream of interested parties pre-order their comics while simultaneously providing financial backing. However, if we want the first story arc of two issues printed, further backers are needed. “We urge anyone and everyone who loves comics to step forward and help us. Think of it as placing a pre-order for your copies. They will be printed in a limited edition run – so secure your place in comic book history before it’s too late,” Hewitt concludes.