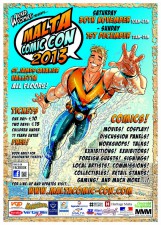 The Malta Comic Convention 2013 – the biggest and most awaited comics related event on the Islands will be happening in less than a month. This event is organised by local NGO Wicked Comics which is a voluntary organisation aimed at promoting the comic culture world wide. Wicked Comics would like to take this opportunity to thank all its sponsors and supporters amongst which are entities such as the British Council, the French Embassy, the Italian Institute of Culture, the Malta Tourism Authority, Heritage Malta and St. James Cavalier for their continued support.

Ever since its inception the annual Malta Comic Con has provided the biggest platform for local creators to exhibit, showcase and sell their work. This year will see the biggest number of participating Maltese creators which include writers, artists and handcraft artisans. Joining the local artists will be a host of international creators which include a healthy mixture of renowned and established creators as well as number of leading up and coming ones. Besides boasting the biggest number of international creators, this year’s show also contains the most culturally and stylistically diverse group of guests yet. Amongst which are Ian Churchill, Mike Carey, Sean Phillips and Charlie Adlard from England, William Simpson from Ireland, the SOB crew from Wales, Rebekah Isaacs and Ales Kot from the USA the latter of Czech descent, Marco Santucci, Emanuela Lupacchino and Stefano Cardoselli from Italy, Grafimated School of comics from Sicily, Guillermo Ortego from Spain, Rosalys and Joel Alessandra from France, Esad Ribic from Croatia, Michael Dialynas from Greece, Tasos Anastasiades from Cyprus and Dave Lung from South Africa. All these and the rest of the guest creators look forward to this opportunity to chat with their fans and sign their books. Besides selling their books and original pieces of artworks the majority of these creators also sketch for free or do commissioned work for fans during the convention. An opportunity which art lovers and collectors certainly cannot afford to miss!

The Malta Comic Con 2013 will be celebrating its 5th year anniversary by comprising all things falling under the comic culture banner and promises 2 days of awesome entertaining and educational activities. On both days there will be material specifically intended for children while other specifically intended for a mature audience. Guest creator Tim Perkins who runs an all ages comic book company will be hosting his parents and children comic art workshop, while Dave Windett has practically worked on all the popular cartoon characters and will be happy to sketch such characters for children and adults alike. In the cinema free animation movies will be showing on both days. Art work and collectibles exhibitions will be held in the hall, and the guests will be participating in a number of fun and interesting discussion panels moderated by leading pop culture journalist Chris J. Thompson and holding workshops throughout both days. Mike Carey will also be doing an exclusive reading from his novel The Girl with all the Gifts. 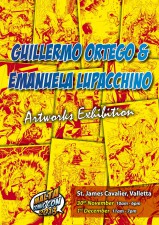 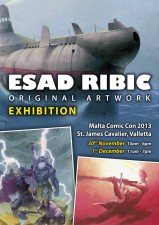 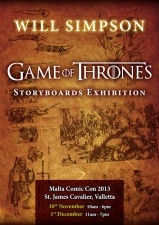 In the Gaming Room set up in collaboration with Video Game People; gamers can simply play for fun on a variety of leading consoles or enter specific tournaments held throughout both days. Minecraft, Pokemon and Ninteno fans will also be in for a treat as Malta’s official groups will be hosting special events during the MCC 2013 weekend. Meanwhile a number of exhibition and introductory table-top and creative role playing games as well as workshops will also be held courtesy of W.A.R.S.

Fans will once again be encouraged to create their own costumes of their favourite heroes and come dressed in these costumes. Should they wish they can also participate in Malta’s Official cosplay competition which will be held during the Malta Comic Con and judged by a panel of professional cosplayers including guest Federica Di Nardo who besides offering advice on costume making will be happy to pose for photos with her fans. For the first time ever professional make up and SFX artist Mary Samele from Media Movie Makeup will be at hand to transform people into their favourite characters while professional photographer Ruben Buhagiar will be available for photo shoots. A number of commercial stands will compliment all these events.

During the duration of the Malta Comic Con 2013 three exclusive artwork exhibitions will be spread around St. James Cavalier. Will Simpson; the storyboard artist for the famous HBO series Game of Thrones, will be showcasing some of his original artwork from the set of the show, while painted artwork master Esad Ribic who has recently been working on the popular Marvel character Thor will be exhibiting some of his finest pieces of original artwork. Attendees will also be able to appreciate the different techniques involved in the pencilling and inking process in the dual exhibition of original artwork showing pencilled pieces by Emanuela Lupacchino and inked pieces by Guillermo Ortego. Both guests will be running an exclusive guided tour of the exhibition and sitting for a Q&A session later with fans.

A family oriented event, the MCC offers something for everybody, from those with a casual interest to the hardcore fans. Wicked Comics guarantees two days of awesomeness. Fun for everyone!

The Malta Comic con 2013 will be held on Saturday 30th November and Sunday 1st December at the St James Cavalier Valletta between 10am – 6pm (Sat) and 11am-7pm (Sun). Children under 11 years enter for free.