Another great British comic from Titan’s new line, full of ideas, a fascinating mismatch of characters and a corkscrew of a plot that twists its way through time, space and reality.

Any writer who opens with quotes from Pope and Einstein certainly isn’t lacking in ambition.  It is in those quotes that we find Si Spurrier’s twin themes of love and time that unfold over the following pages.

A brilliant mathematician, having died young, does a deal with the powers-that-be so that he can be reincarnated within his lover’s lifetime.  The afterlife, not a Heaven and not quite a Hell, thinks it’s outwitted him by cruelly reincarnating him towards the end of the lover’s life.  However, he beats the system through injecting an idea into proceedings, an iota of chaos that the structured mathematics of the keepers of the afterlife is incapable of conceiving.  An intricate time-travel love story ensues, but all told from the point of view of the man sent to stop it.

Numbercruncher is an anti It’s a Wonderful Life.  Life here isn’t wonderful, and the afterlife could be even worse.  An even more cynical A Matter of Life and Death, taking its queue from the Powell and Pressburger film by interspersing colour with black and white, often in the same panel.  Colour represents the real world; life itself is colour, unpredictability.  The afterlife deals in black and whites, in absolutes, in numbers. 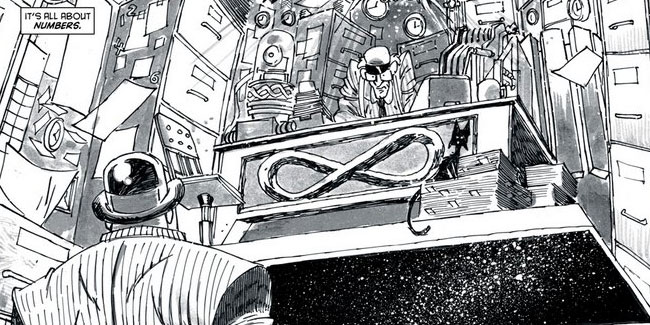 Spurrier’s story here is complex and packed with ideas, twists and interesting characters.  This first issue is a little heavy with introductions and expositions, but with so much going on, and so much of it fascinating, that can easily be forgiven.   The narrative voice and the dialogue in general is entertaining and makes what could be a heavy read zip along.

PJ Holden has a massive job to do in portraying all of this.  He has to show us the very different worlds and times of the various characters as well as a fully realised afterlife.  On top of that he has to convey all of the information of a complicated plot and still keep it looking great.  It’s a visually striking book throughout, with the great Jordie Bellaire doing a lovely job in subtly blending her colours in with Holden’s grey tones.

If Numbercruncher keeps this level of quality up for the remaining issues, and I’m assured by those who read it in 2000AD that it does, then this should be a fantastic addition to your pull list.