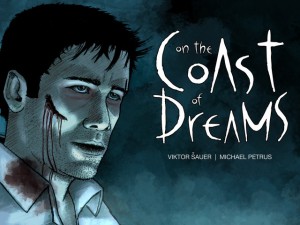 Are you a fan of comic books, fantasy or supernatural wandering in another dimensions? Then you could be surely interested in an unconventional and special comic story which pulls you into the mysterious universe of dreams – the world that sucks you in and won’t let you go…

This unique narrative tells a story about an ordinary man – the father of a daughter, who is trapped in a coma and her only chance for saving her life is hidden deep inside of the world of dreams. The man, who is called “The Seeker” in the world of dreams, encounters a wide variety of entities and creatures on his journey. These beings go far beyond the borders of our material world in their forms. While some of them try to help him on his way, the others want to destroy him.  So not only does he have to fight with his direct enemies, but also with the enemies like fear or distrust, hidden deep inside himself. And what is more, how should he hold on in moments when everything seems to be hopeless? And the time is running out…

This original story inspired by dimension of dreams is brought to you by the creative duo of Viktor Šauer (story) and Michael Petrus (art) who have been preparing this project for last two years. The lettering comes from hands of experienced font-maker and letterer, Miloš “Mankin” Mičátek.

To make this story happen and get it into your hands in a printed form, the authors need your support.

For this purpose, as the first Czech comics project, the authors prepared and launched a campaign on a crowdfunding portal Kickstarter, where you can find more information about the project itself and support it. So do not hesitate, choose from the wide range of great rewards, share info about the project and become its part!