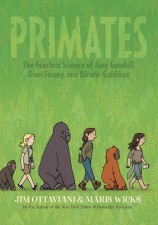 With Primates: The Fearless Science of Jane Goodall, Dian Fossey, and Biruté Galdikas, #1 New York Times Best-Selling author Jim Ottaviani returns with an action-packed account of the three greatest primatologists of the last century: Jane Goodall, Dian Fossey, and Biruté Galdikas. These three ground-breaking researchers were all students of the great Louis Leakey, and each made profound contributions to primatology—and to our own understanding of ourselves.

Tackling Goodall, Fossey, and Galdikas in turn, and covering the highlights of their respective careers, Primates is an accessible, entertaining, and informative look at the field of primatology and at the lives of three of the most remarkable women scientists of the twentieth century. With charming and inviting illustrations by Maris Wicks, this is a nonfiction graphic novel with broad appeal.

Join us on Saturday June 29th from 4:30-6pm with artist Maris Wicks, to celebrate the release of this wonderful new graphic novel.

Maris Wicks has used her opposable thumbs to draw comics for Adhouse Books, Tugboat Press, and Spongebob Comics. When she’s not making comics, Maris works as a program educator at the New England Aquarium. She is an avid tool user and is particularly fond of bananas.