In this month’s report from the Process group at London’s Gosh! Comics, Infinite Vacation’s Christian Ward talks about his career to date and the intricacies of his own creative process. 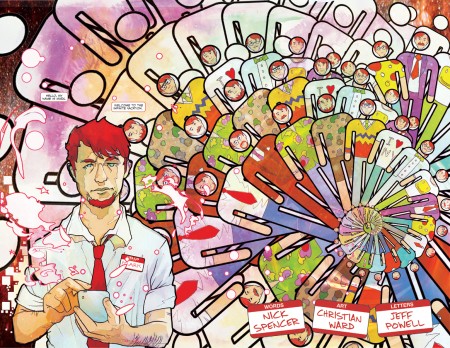 This month we were lucky enough to be joined by Christian Ward who is best known for his work on Image titles such as Olympus and Infinite Vacation and is currently working on ODY-C, an upcoming title from Image with Matt Fraction.

We began by talking about Christian’s earliest memories of comics with Chris observing that there wasn’t a single issue of a comic that he remembers picking up. When put to the crowd most people agreed that while there were characters or title that they remember being the first comics they loved (lots of votes for Calvin & Hobbes and Peanuts) it was harder to pinpoint their first actual comic.

Christian’s first favourite character was The Incredible Hulk but he made the point that this was a character that he knew from the television show and cartoon as much as the comics. This raised a wider point about the place that comics have in culture and the value for companies to move beyond comics to make their characters have a wider appeal than just in comics, a strategy that has paid off massively for Marvel with their current run of blockbuster movies. 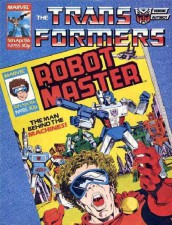 Chris picked out the weekly Transformers comic as being his favourite as a kid (a sentiment shared by myself and Ricky Miller of Avery Hill Press as well as countless others I’m sure). The story of the Transformers comic licence is interesting, beginning with the very functional strips produced by the Marvel US team and really coming to life when the Marvel UK team, headed up by Simon Furman and Geoff Senior got their hands on it. Furman’s writing gave each character very distinct personalities, far beyond the ‘goodie/baddie’ dynamic of the earlier stories and Senior’s designs ignored the more glaringly clunky elements of the action figures in favour of a cleaner look more suited to the comics page.

Coupled with back-up strips of the caliber of Rocket Raccoon (featuring art from a young Mike Mignola) it was a brilliant weekly comic that also had the advantage of a huge distribution network. Christian remembers his copy of Transformers being bundled in with the family papers at the weekend and I had mine reserved at my local newsagent with a helpful ‘STEVEN’ printed at the top in biro. The disappearance of comics from newsagents was a massive blow to attracting younger readers, leaving them to search out specialists that might be too far away and missing out on the possibility of picking up a comic when your Mum or Dad pop into the local shop for a pint of milk.The success of Transformers at that time, alongside Grant Morrison’s work on Zoids, shows that even licenced properties can lead to good comics in the right hands. 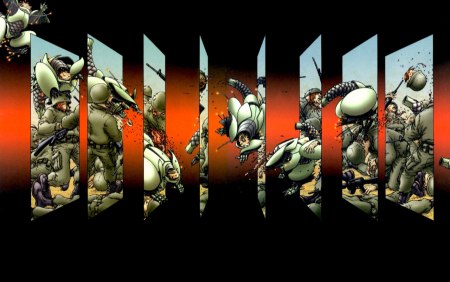 Along with Transformers, Chris was reading 2000AD and being blown away by the art in the books. Eventually his comics consumption dropped off, initially restricted to 2000AD and Judge Dredd annuals at Christmas and then none at all. Chris found his way back through books like Watchmen and Arkham Asylum and fell back in love again after reading We3 (above) by Grant Morrison and Frank Quitely. Impressed by Quitely’s mastering of space on the page and control of time with the comics form Christian began to feel inspired about comics again. He’d always made comics, using his own characters rather than producing stories for existing ones, but had always been encouraged to look elsewhere for a career due to the challenges of making a living as a comic creator.

While studying Illustration at University Chris also began to paint and once he’d graduated had plans to pursue both of these disciplines with work as a children’s book illustrator while exhibiting his paintings in galleries. Neither of these proved particularly fulfilling though so Chris chose to qualify to teach Art at Secondary School level.

He continued to produce his own work though, and set up a website to showcase it which lead to his first break into the world of comics. Writer Nathan Edmondson was looking for an artist for his new story but didn’t want a typical comics artist. Instead he was looking for someone with a vision beyond the traditional comics form of panels and splash pages, an artist with an eye for design as much as line work. He trawled his way through the blogs and websites of a number of illustrators eventually finding Christian’s. Discovering that this illustrator had a firm grounding in comics and was avidly studying the work of Frank Quitely could only be a bonus…

Nathan and Christian produced Olympus for Image Comics, the story of a pair of brothers sent into the modern world to deal with rogue Gods and Goddesses that have survived from antiquity. Christian is quite dismissive of his work on Olympus, felling that he attempted to mask his lack of confidence in his figure work with overpowering colouring.

Infinite Vacation gave Chris a chance to be more expressive of his own ideas and style and is work that he’s much happier with. Developed in concert with Nick Spencer, this book allowed Chris to have more input on story and gave him a chance to work on a concept that had fascinated him for a long time; that of parallel universes.

Infinite Vacation is the story of Mark, a man who expresses his dissatisfaction with his life with his compulsive use of the Infinite Vacation app on his phone, which allows him to visit other versions of his life across the multiverse. This idea allowed Christian to stretch the limits of the comics page and create a world made up of infinite worlds. His use of perspective, geometry, mirroring repetition and layout are dizzying and give the comic page a depth and breadth that can take the breath away. 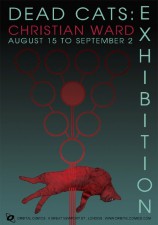 We also got to see some of the pieces from Chris’s recent show at Orbital Comics. Chris showed us his work at various stages beginning with the pencils he uses to outline figures and background images and the work he does using ink, watercolour and, in one case, salt and olive oil to create the vivid colour and texture that bring the pages to life. He talked us through his use of Photoshop to add or manipulate colour, thickening lines and layering the work. (Click here to see Chris guide you through this process on his site).

Christian’s work on Infinite Vacation highlights two elements of his work in particular that he emphasized to us. Firstly there is the importance of colour in terms of delivery and secondly the role of the artist in telling the story in a comic. Chris feels that a good artist’s job is to slow down the process of reading for the audience, allowing them to immerse themselves into a book and giving them a more enjoyable reading experience. For myself, I find I skim a badly drawn book meaning that I read it in a very cursory manner which is a disservice to the writer and artist. Well drawn books that have been carefully composed and executed draw you in, encouraging you to linger over the images which will then mean you absorb the words in a more leisurely manner. 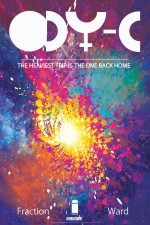 To finish Chris talked about his new project at Image with Matt Fraction which is called ODY-C and is a gender-swapped retelling of Homer’s Odyssey set in space. Chris also shared a sneak peek of the design of the central character and revealed a few points of inspiration for the project, including Barbarella. He took a few questions at the end and gave an impromptu tutorial on how to draw hands!

Process regular Carlos Pascoa then told us about his new strip The Statue which will be published as part of David Lloyd’s Ace’s Weekly webcomic series. Carlos brought along his finished strip which was freshly coloured and look lovely. He explained the inspiration for the story came from an anecdote from a friend that he embellished to tell his tale, showing that you can harvest stories from everywhere.

As a bonus treat at the end of the evening we were all treated to a fabulous free comic from the lovely people at Backwards Burd. With their new risograph printer and binding skills these guys are ready to produce a swathe of fresh new comicky goodness. Check them out!