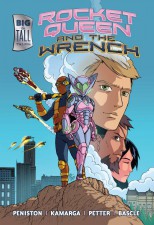 Big & Tall Tales, Inc. has published its first digital comic book, Rocket Queen & The Wrench. Rocket Queen is a six-issue limited series detailing the story of the world’s youngest superhero and her adventures with the son of her family’s major-domo and manservant.

“The Hollywood pitch is Iron Man meets Harry Potter,” says Rocket Queen writer Justin Peniston. “We’re just looking to make the kind of comic that made us love comics when we were kids.”

Rocket Queen (Katsumi Darian) is the junior member of The Zoom Family, the world’s premier armored heroes…but she’s also only twelve years old. Her responsibilities leave her without many friends, until Jamie Baldwin, the troubled son of her father’s best friend and assistant, comes to spend a summer on the estate. The last thing she expects is for him to uncover her secret, or to insist on helping her discover the truth about her family’s greatest tragedy.

Written by Big & Tall Tales founder Justin Peniston with art by Ramanda Kamarga, colors by Rainer Petter and Garry Henderson, and lettering by Jacob Bascle, Rocket Queen & The Wrench is a superhero adventure story intended for readers 9 and up. The comic retails for $0.99 and can be found exclusively  at http://www.comixology.com, keywords “Rocket Queen”.