Whedon’s characterizations and dialogue are spot-on, making this comic wholly believable as a continuation of events following the 2005 feature film.

Where is the Firefly-class ship Serenity? In the capable hands of writer Zack Whedon and artist Georges Jeanty somewhere in a dark corner of the ‘verse. But the crew is rejoining the population with issue #2 in order to save Zoe’s life. Complications following childbirth require immediate medical care that Simon cannot provide onboard. Mal—in typical Mal fashion—never gives a second thought to the danger of coming out of hiding. Zoe needs help now, and that’s what Mal is going to provide.

With the Alliance forces closing in, Mal is forced to leave Zoe with the doctors and flee. It’s not a decision he took lightly or well. River offers a solution and suggests that she try to access the information placed in her subconscious and trade it for Zoe’s release. No better ideas present themselves, and Simon places her in a coma to induce the memories.

Complicating matters is bounty hunter Jubal Early, now on the hunt for our intrepid crew, and the members of the new resistance who are determined to make Mal their new leader. Jayne Cobb hired himself out to the new resistance to help find the Serenity and hasn’t changed a bit. His continued mercenary ways aren’t impressing Mal. In finding the ship, however, Jayne unknowingly led Early right to their doorstep. 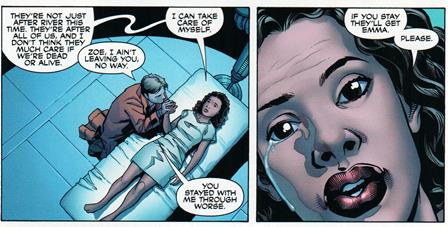 Whedon’s characterizations and dialogue are spot-on, making the comic wholly believable as a continuation of events following the 2005 feature film. Different this time are the interpersonal relationships aboard ship. Zoe is without Wash. Simon and Kaylee are together. The biggest and most underplayed relationship shift is that Inara, who has lost her status as a companion, is now with Mal. Rather than give readers a “ta da” moment, however, Whedon puts their relationship right on the page as if it was the only logical step for them to take. It was. No need to sensationalize it like DC did with the two-page spread of Wonder Woman and Superman kissing. That understated plot motion was one of the brilliant devices of the original show, and it’s wonderful to see it employed here.

Artistically, Jeanty’s impressionistic style suits the characters in the same manner as his take on Buffy the Vampire Slayer. His isn’t a photo-realistic depiction of the original actors, rather he concentrates on the unique facets of their features that distinguish their facial expressions and body language. Let’s face it, Firefly fans are Buffy fans, and they will embrace Jeanty’s style and his unique panel construction. His art tells the story beautifully, even if you stripped away the dialogue.

Browncoats rejoice! And add this title to your pull list immediately.