Peter Milligan and Valentine De Landro’s incredible three-issue miniseries comes to its shocking conclusion, tearing down the Shadowman of old and daring to step into the character’s uncertain future.

Jack Boniface, aka the Shadowman, has been struggling for a very long time now to keep control over the loa that possesses him. Each generation of his family is possessed by the exiled spirit and tasked with destroying other voodoo exiles, being granted incredible mystical power to fulfill this quest at the cost of losing themselves to the loa.

But Jack has managed to succeed at keeping his demon under control, aided by the love of his girlfriend, Alyssa, and the knowledge that his father, the previous Shadowman, died a hero. That is, until he learned otherwise. 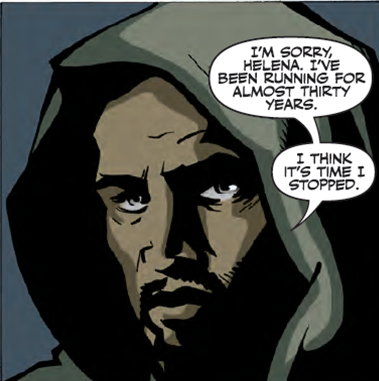 Shadowman: End Times is a three-part series that has blown apart this core tenet of Jack Boniface’s existence, as his loa – in an attempt to wrest full control – exposes the truth to Jack that his father, Josiah, did not truly die.

For the past two issues, we have followed Jack’s descent into violence and despair as he tracks down his father in the Voodou Lands to exact his revenge, and this month that journey reaches its conclusion in Shadowman: End Times #3.

Peter Milligan’s story thus far has been excellent, cutting right to the core of the character. In the final issue, he manages to keep the narrative focussed and clear, yet allows it to spiral desperately out of control.

As Jack’s loa begins to assert control, he delves deeper and deeper into the darkness he has tried so hard to avoid, including crossing over to the land of the dead, sacrificing those closest to him, and engaging in necromancy to resurrect one of his greatest foes.

When the inevitable final confrontation occurs between Jack and his father, Milligan forces the Shadowman further into the abyss than we have ever seen, establishing an entirely new world order for the character’s future.

Valentine De Landro’s stoic artwork (along with understated monochromatic colouring by David Baron) perfectly evokes the betweenness of the Voodou Lands,  both familiar and otherworldly, as if the spirits that linger between the planes of the dead and the living are obscuring the very colour of the world. The featureless blue-grey backgrounds add to the liminal nature of the space Jack and Josiah occupy. To paraphrase Leggy’s comment in issue #2, one leg is in each world.

The visual tone could not be better suited to End Times‘ narrative arc. Just as the Voodou Lands lie between the worlds of the living and the dead, the book itself marks a transition between the established status quo of the character and the new order that is to follow.

In one fell swoop, End Times #3 inverts both Jack and Shadowman so that they are no longer the characters we knew. It is an insanely daring move, but Milligan and De Landro pull it off. Their understanding of the emotional core of the character is clear throughout the book. The tone is perfect, each manoeuvre precise, each reaction genuine – which is exactly why this issue is so shocking.

As readers, we feel we know Shadowman inside and out. When Jack succumbs to the darkness, we desperately want to believe that some deus ex machina will make everything alright. Because we know Jack to be stronger than his loa.

End Times #3 provides the circumstances to break that strength and allow the full darkness of the Shadowman to take over. It is a jarring read; Milligan and De Landro have truly brought readers to the end times of the Shadowman they knew, and every step forward from here goes into uncharted territory.