The lawlessness of the Deep South makes an ideal setting for an adaptation of Robin Hood, but Sherwood, TX hasn’t yet found the balance between honouring the original material and exploring the new.

Adaptation is a tricky thing. It requires a deep knowledge of the source material, but also the creative mind to reimagine it. It must show incredible respect for what lies at the core of the characters and the narrative, but it must also teach us that there are new things to take from the story.

It is a tug-of-war between the specific and the vague – at times drawing literal comparisons with the original work, and at other times merely implying them. Adaptation is a very tricky thing.

That fact alone would make Sherwood, TX a daunting prospect for most creators, but when one considers that writer Shane Berryhill and artist Daniel Hillyard are adapting the legend of Robin Hood – one of the most iconic figures in the whole of English folklore – the spaghetti western comic book suddenly has a lot more to live up to. 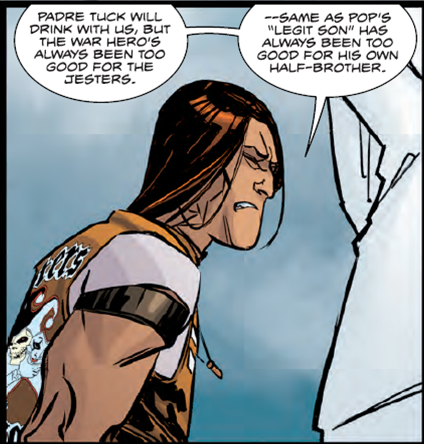 Set, as the title suggests, in Nottingham County, Texas, the book very quickly tries to anchor its new setting and dialect with the recognizable; Rob Hood, Padre Tuck, LJ, and “Richie the Lion” make a direct appeal to the audience to accept the folk characters’ new context.

That context is a conflict between two biker gangs: the Jesters (lit, Merry Men) and the Nobles. Following the death of  “Richie the Lion”, the Nobles arrive to cause trouble at the funeral and Rob Hood – freshly returned from military service – punches out the son of a Noble called Prince. This places Rob squarely in the crosshairs of the Nobles, who viciously attack him and leave him for dead.

In many ways, the small-town South is the perfect place to transpose the tale of Robin Hood. There’s a certain romantic quality to the sheer lawlessness of Nottingham County, where the cops are on the take and mutually assured destruction is the only thing that keeps the Jesters/Nobles conflict from spinning out of control. The attack on Rob will surely tip the scales, however, if I know anything at all about Robin Hood.

And yet, as fitting as the setting may be, and as clever as the nods to Robin Hood are, this issue hasn’t totally earned its place as a solid adaptation. Berryhill spends so much time establishing his versions of the characters that he forgets to establish very much of the story. How Richie died, where Prince fits in the power structure of Nottingham County, and what’s at stake in the coming escalation are all elements that receive little or no attention in this issue.

It may have better served the book to spend less time tipping the hat to the characters of the source material and more to its narrative similarity. As it stands right now, there isn’t nearly enough to go on to know if the adaptation can actually hold any water. 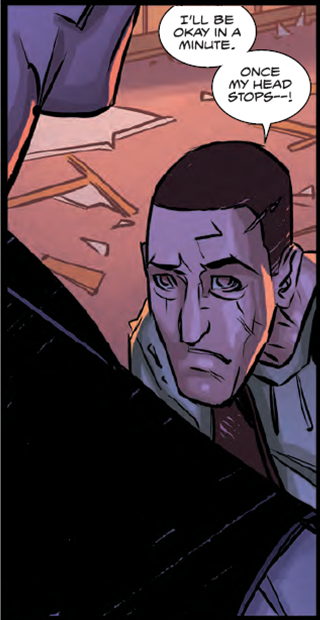 Hillyard’s art is inversely weighted to Berryhill’s writing. Landscapes, vehicles, and buildings are all sharply drawn, with clean and elegant lines and precise geometry. People, on the other hand – and faces, in particular – range from overdrawn, in which excessive numbers and weight of lines make even the young characters seem old and craggy, to extremely minimal.

The result is that, with the exception of the odd costume or facial hair, many of the characters are difficult to recognize by their faces, and it is even harder to glean anything about what they are thinking or feeling.

In both the writing and the artwork, I believe that the book’s problems are symptomatic of the challenges of adaptation. In the case of the former, honouring the source material became more of a burden than a gift, because it robs the reader of engaging with actual narrative development.

For the latter, establishing in detail a unique style and setting for the adaptation came at the expense of what should be the most readily recognizable aspect right off the bat: the characters.

That’s not to say that Sherwood, TX #1 is a bad adaptation. In fact, I see some terrific potential in the creative setting, and it’s very clear to me that Berryhill understands the character relationships from the original Robin Hood, whether he chooses to support those or invert them.

But the delicate balance between the old and the new hasn’t quite been found yet. If Berryhill and Hillyard can find that sweet spot, drawing from the strengths of the original as much as they trust in the relevance of their innovation, then Sherwood, TX could be a terrific piece of graphic literature.