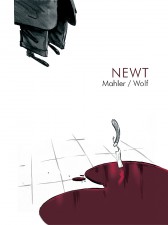 A hairdresser with a pronounced predilection for extravagant hair sculptures is kidnapped by a sinister gangster – all during the shave of a depressed used-car salesman. Having recently been left by his dolled-up dentist wife for a man with better hair and a convertible, the salesman – the only witness to the crime –  now has a slightly crazed homicide detective stalking him, and half a beard still to shave off.

Nicolas Mahler and Heinz Wolf paint a picture of ordinary failure to show that there’s a murderer in all of us.

“A tightrope walk between a black comedy with tragicomic trains and cynical
grotesque.” – TAZ

“With a few words, but with grandiose observations from everyday life here a creepy-comic story is told.” – Frankfurter Allgemeine Zeitung

About the creators:
Nicolas Mahler is the Austrian author of My Therapist is a Psycho and What’s Wrong With Us? Cartoons for Doctors and Patients. He has published over twenty books, with several English translations of his work having been published previously by Top Shelf (Lone Racer, 2006) and Fantagraphics (Angelman, 2012).

Heinz Wolf is the artist for over a dozen German comics. He originally trained in fabric design, and then worked in theatre painting. He works as an illustrator and comic book artist in Vienna. Both Wolf and Mahler work together on the project gallery in Vienna – Kabinett Passage.

For more on Soaring Penguin Press and their books check out their website here.