David Quantick and Shaky Kane’s one-shot collaboration is a veritable maelstrom of cop-film clichés, eye-straining artwork, and unrestrained imagination. It is an undeniably fun – if not wildly confusing – piece of graphic literature.

I intended to have this review done days ago. I bought the book on Wednesday, when it was released, and read it several times throughout the day, making notes after each read. Then I sat down on Wednesday evening and I was at a loss for what to say.

That’s Because You’re A Robot, written by David Quantick with art by Shaky Kane, is perhaps one of the most unique reading experiences in comics. The one-shot comic is both complex and simple, garish and beautiful, and shockingly enjoyable, considering how little I feel I understood it.

The premise of the book is simple: two cops in the Los Angeles of the not-so-distant future are told that one of them is a human and one is a robot, but no one knows which is which. What follows is a buddy cop adventure during which the duo scuttle what should have been a simple interrogation, accidentally bust an undercover operation by fellow officers, engage in a wonderfully surreal firefight, lose their badges, and discover corruption deep within their department’s ranks, all the while being thoroughly distracted by the existential crisis at hand.

Part of what makes this book so enjoyable is its simplicity, in terms of both story and character. In a homage to the classic buddy cop narrative, Quantick loads the book full of some of the genre’s best clichés: the unnecessarily reckless driving, the impulsive rule-breaking of the officers, and the hyper-violence of the larger-than-life shootouts. Throw in a surly but understanding police captain who suspends the reckless cops, and you’ve got dialogue that feels like it was pulled straight out of Lethal Weapon. 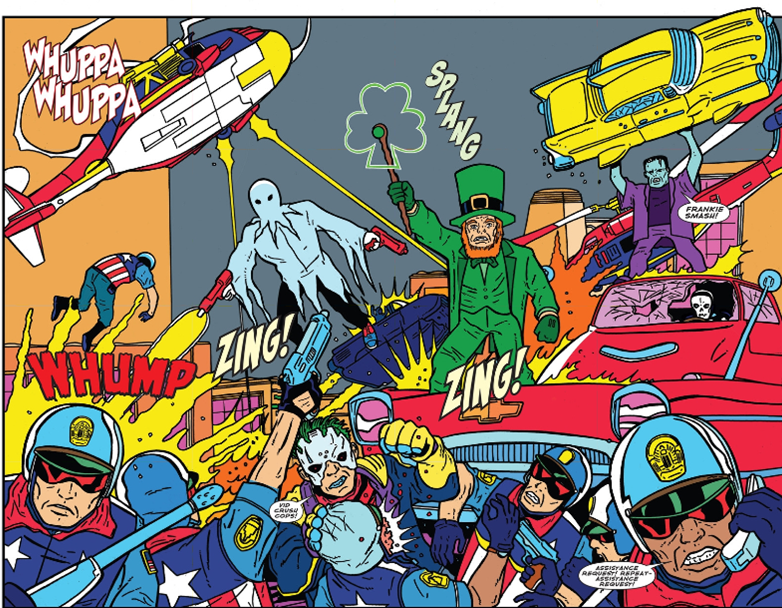 The book is also populated by some particularly bizarre characters, including the Ager (who can change his age at will), the purple-skinned Narkus, and – of course – the giant flying leprechaun promised us in the book’s solicitation.

In addition, the colourful cast of supporting and tertiary characters helps to blend the book’s more traditional buddy cop elements with the far more fantastical and futuristic setting.

Of course, Shaky Kane’s art is at the heart of this peculiar balancing act. Between the harsh lines and electric colours, Kane’s visuals manage to represent the story and characters with simplicity while remaining dizzyingly insane.

His pop-art-inspired style matches the fun and imagination of Quantick’s bizarre retro-future. The precise proportions and physics of the world are less important than the hilarious image of the approach of the “stooges” – all of whom are flying for some reason – or how the tank of a cop car seems to grow exponentially when it’s plowing through traffic instead of being stuck in it.

The entire issue is enormous, silly fun, and yet when it’s all over, there is a terrible feeling that you might have missed something far deeper within its pages. After all, it is never revealed which cop, if either at all, is a robot. Nor is it revealed exactly what the corruption within the LAPD is, nor how it relates to the Ager, Narkus, and the rest of the book’s escapades.

Several reads of the book later, the real message of the book remains elusive. It could be as simple as the fact that the cops’ existential dilemma is secondary to the very tangible crimes surrounding them – that we should define ourselves by our actions in the present moment.

Or perhaps the book is a warning against the misuse of scientific achievements, as both the Ager and the supposed robot cop are meant to be connected to the same conspiracy. 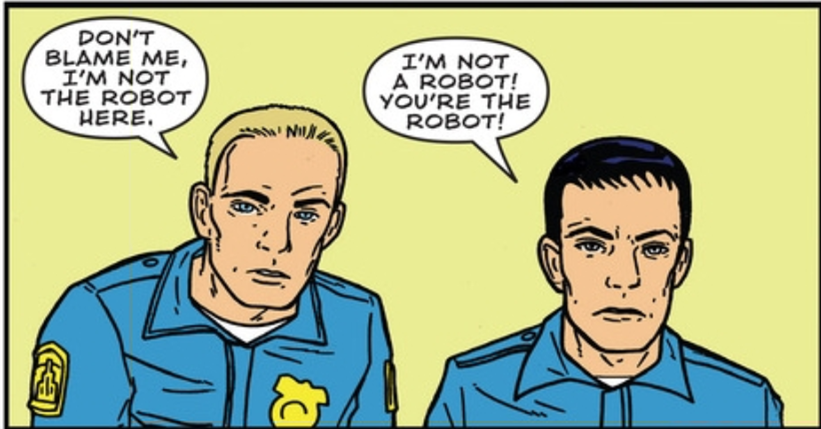 To be honest, I don’t feel that there’s enough in the book to support either of those morals very well. What I do know, however, is that no matter how many times I’ve read the book, I still crave the moral, or at least some feeling of closure.

What makes That’s Because You’re A Robot so shocking is that despite the level to which it relishes the clichés of the buddy cop genre, it absolutely and deliberately denies the greatest cliché of them all: the tidy resolution.

Quantick and Kane’s wild one-shot exposes a critical flaw in the way literature of all kinds has conditioned readers. It is a deeply disturbing feeling for a story not to come to a close, knowing there’s not going to be a follow-up issue or a sequel or anything of the sort.

As a reviewer, I felt – and continue to feel – a wave of crushing self-doubt that perhaps I missed the point of the story. The title is focused on the robot issue, but the book is not. What does it mean? Where’s the deep, philosophical message?

Maybe there isn’t one. Maybe I’ve missed it entirely, having been distracted by the sheer amount of fun I had reading the book. Maybe that fun reading experience was the point.

I still have no idea what happened.