Last week saw the re-release of five books from the children’s comics specialists The DFC Library in new softcover editions. For those unaware of The DFC it was a brave subscription experiment in anthology comics for kids that ran between 2008 and 2009 and acted as the spiritual predecessor of the critically acclaimed The Phoenix weekly, currently wowing British kids with its mix of adventure stories, humour strips and features.

Over the last few years a number of collections from The DFC have been printed showcasing the diversity of that publication’s output. They also highlight some enormously talented creators who continue to prove that comics for kids are as viable and vital a medium as ever. In recognition of the new format of DFC releases we’re re-running some overview thoughts today on the original hardcover editions of these books culled from two previous articles here at Broken Frontier, Enter the DFC Library and Return to the DFC Library, originally published in 2011. Look out for a full review of the all-new Fish Head Steve! DFC offering in the next few days here at BF. 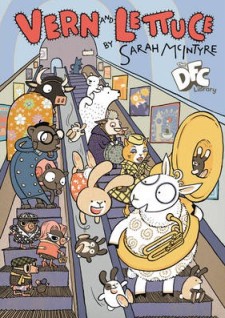 Sarah McIntyre’s charming Vern and Lettuce is probably the DFC offering aimed at the youngest target audience. Chronicling the adventures of Vern the sheep and his best friend Lettuce the rabbit, in the animal world of Pickle Rye, this is a delightfully good-natured collection of one-page gag strips (in the first third of the book) and a longer, ongoing storyline for the rest. The latter follows Vern, Lettuce and their animal friends, as they journey to the big city seeking fame on reality TV show Barnyard Talent. Vern and Lettuce is, without a doubt, the comic book equivalent of the “feelgood movie” and the ideal entry point into the medium for a whole new generation of potential comics aficionados.

Good Dog, Bad Dog is a madcap detective comedy with a canine twist. Dave Shelton’s slapstick cop antics will appeal on one level to the younger readers with their visual gags and the strip’s often frenetic pacing. Older readers, however, will find much to amuse them in GDBD’s obvious homage to the film noir genre and in picking up the loving references to that era of cinema.

Those British readers who remember borrowing Asterix albums from their local libraries as children and poring over every detail, in every panel, will find much to love about Monkey Nuts, the magnificently absurd comedy from the ever popular Etherington Brothers. Every page is a thing of beauty, with art so detailed that each re-read is a new journey of discovery. On the Isla De Monstera, in the middle of the Bermuda Triangle, Sid, an unemployed, tap-dancing monkey and Rivet, a robot vending machine, form a crime-busting business under the guidance of police Chief Tuft, a talking coconut. As brilliantly bizarre as it sounds, this is a perfect showcase for the talents of the inimitable Etherington Brothers. 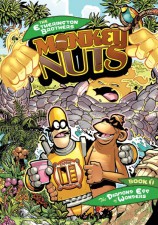 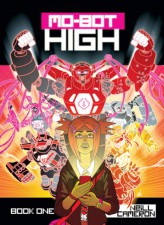 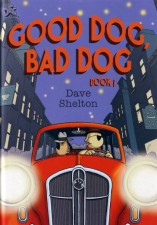 Mo-Bot High from Neill Cameron is a winning fusion of the sensibilities of the school-based serials of British Girls weeklies of the ‘70s and ‘80s with a contemporary Manga influence. Cameron’s story follows schoolgirl Asha as she discovers something very peculiar about her new school: every pupil, including herself, is able to control their own personal giant robot via their mobile phone. Playground politics combine with dark conspiracies in a strip which can be succinctly described as Grange Hill meets The Transfomers.

In James Turner‘s DFC offering the feline Agent K and his operatives Irwin (a kleptomaniac pelican), Rex (an intellectually-challenged lizard), Bearbot (a robot bear!) and Beesley (an upper class bee) make up the Super Animal Adventure Squad. In the two stories that comprise this volume the team must foil a mad scientist’s plan to steal every cake in the world in ‘The Teatime of Doom’ and save the priceless treasure known as the Jade Baboon from the cookery-obsessed pirate Green Beard in ‘The Case of the Baboon Bandit’. 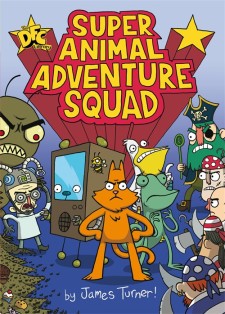 Collecting a number of one-page and two-page strips that make up two story arcs from The DFC, Super Animal Adventure Squad positively revels in its own silliness. The humour surrounding this endearingly incompetent group of animal “super-heroes” is relentlessly and unashamedly ridiculous and yet far cleverer than you realise on a first superficial reading. Turner is quite brilliant at pacing his comedic set pieces and the running gags with the various agents’ distinctive personalities are an absolute joy!

Sometimes slightly surreal and always wonderfully, hilariously self-indulgent, Super Animal Adventure Squad is packed with laugh out loud moments (and that’s real laugh out loud moments in contrast to meaningless “LOL” moments…). Again, the target audience may be younger but this remains a piece of comfort reading that will put a smile on the faces of readers of all ages.

For more information on the books in the DFC Library check out the site here. All books are available now priced £6.99.